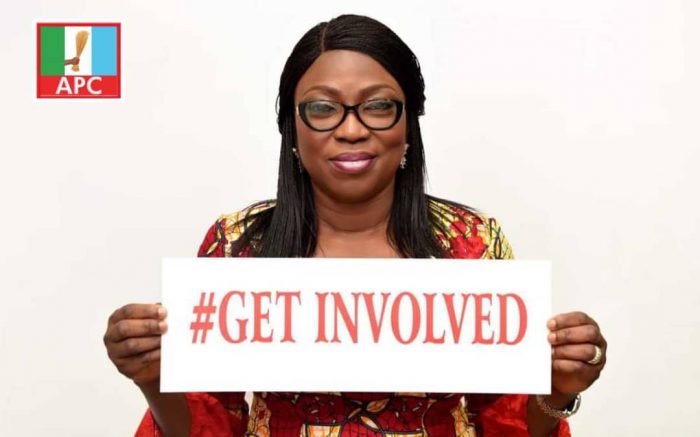 Bolanle Ambode asking Lagosians to get involve in voting APC

The wife of the Lagos State Governor, Mrs Bolanle Ambode, has intensified mobilization of women in the state for the All Progressives Congress, (APC), governorship candidate, Mr. Babajide Sanwo-Olu, urging them to vote en-masse for the party’s candidate in Saturday governorship election.

Mrs. Ambode spoke when she embarked on political rally programme tagged: “Progressive Vanguard Door to Doors Campaign’ on- going in Epe, Isolo, Itire Ikare Iru Victoria Island and other part of the state.

She said the APC held women in high esteem, assuring them that they would enjoy more empowerment and participation in government if the party wins in the state.

Mrs Ambode averred that if Sanwo-Olu was elected on March 9, 2019, more women would be economically empowered by his administration.

“That is why you women should do more by coming out in large numbers and cast your votes to ensure that Babajide Sanwo-Olu becomes Lagos State Governor with millions of votes.

‘’Babajide Sanwo-Olu has promised to include women in his government the same way my husband, Governor Akinwunmi Ambode’s administration included and empowered women in Lagos State.’’

The governor’s wife, who described the ruling All Progressive Congress as light, said darkness and light were incompatible.

According to her, a vote for the APC waas a vote for more progress, adding that the Peoples Democratic Party, which represented darkness died in the state a long time ago.

While donating souvenirs for Babajide Sanwo-Olu and Kadri Hamzat ticket to the Convener of the Lagos Progressive Movement, Seyi Bamigbade, Mrs Ambode said Nigerians had become wise to reject the PDP.

‘’Before 2015 general elections, Nigeria was under siege, as nobody knew what would happen the next day. But because of the persistent prayers of Nigerians, today, the scenario has changed for the better.”

She added, “Today, no government has impacted positively on women like APC-led government since 1999. This is because at the beginning, we promised all-inclusive government. That is why we have women participation in the administration.”