My endorsement by Oyo coalition parties will give me victory - Makinde 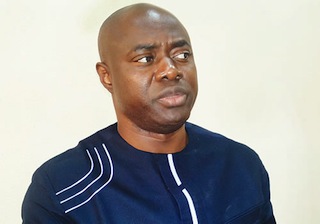 Mr Seyi Makinde, governorship candidate of PDP in Oyo State, says his adoption by a coalition of political parties in the state as their candidate will give him victory during the March 9 election.

Dotun Oyelade, Director of Media and Strategy for Makinde Campaign Organization, said in statement in Ibadan on Monday that the maturity displayed by the leaders of the coalition parties was commendable.

Sen. Olufemi Lanlehin, governorship candidate of ADC, Sharafadeen Alli of ZLP and Bolaji Ayorinde of SDP, had through the signed coalition on Sunday, adopted PDP’s Makinde as their consensus candidate for the March 9 governorship election in Oyo State.

Among the leaders who made the coalition and adoption a reality were former Gov. Rashidi Ladoja, Sen. Femi Lanlehin, Chief Sharafadeen Ali and Chief Bolaji Ayorinde.

“The milestone achievement has now paved the way for the PDP to coast home to victory with the support of other patriotic leaders,” Making said.

The statement urged the APC to look for another business centre, adding Oyo state was out of bounds and out of their stranglehold.