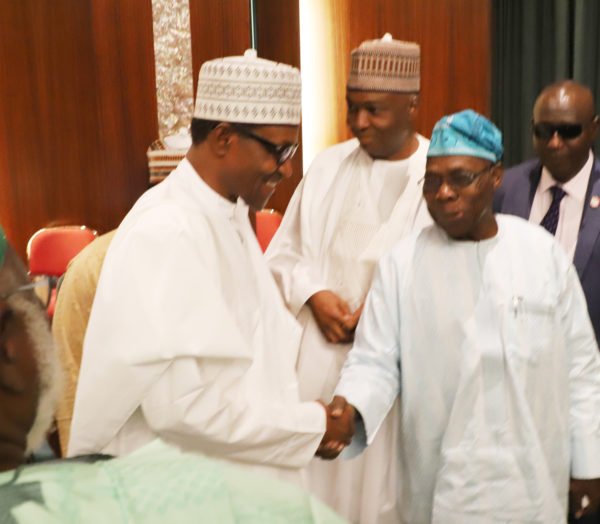 President Muhammadu Buhari said today that he holds former President Olusegun Obasanjo in the highest esteem despite their political differences.

Buhari said this today in a message of congratulations to the former military and civilian ruler, who clocked 82.

The president described Obasanjo as “a passionate and great patriot who deserves accolades for his immeasurable contributions to our democracy and national unity.”

“Regardless of our political differences with Obasanjo, I still hold him in the highest esteem because his contributions to the development of the country overshadow those differences.”

“Chief Obasanjo gave a good account of himself and inspired his juniors with his wit and other leadership skills.”

According to Buhari, “Nigeria’s successful transition to democratic rule in October 1979 was one of Obasanjo’s remarkable contributions to national development.”

“As he celebrates his 82nd Birthday, I wish Chief Obasanjo more good health, knowledge and wisdom in the service of Nigeria and humanity”, President Buhari said.

Earlier today, Obasanjo said he would continue to criticise President Buhari. He spoke at the event marking his birthday in Abeokuta.

According to him, governance is not a family affair, adding that democracy involves criticisms and consideration of all sides to an issue.

‘‘There is nothing personal between President Buhari and I.

‘‘In a democracy, you can criticise a policy, a government or a leader because democracy is not a family affair.

‘‘If it is my brother that is occupying the leadership role and he is not doing what I believe he should do, he must be criticised and that is what democracy is all about.

‘‘I have been in that position longer than any Nigerian will ever be there.