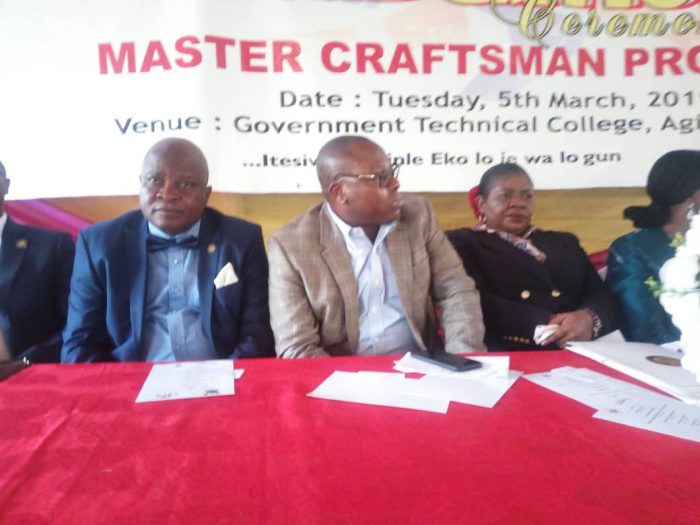 The Lagos State Government on Tuesday graduated 350 artisans in the second batch of its Master Craftsman Project scheme.

The Master Craftsman Project aims to address the skill gap in the housing sector in Lagos State.

Speaking at the event which held in Ikeja, Lagos, Deputy Governor, Dr. Oluranti Adebule, said that the Ambode administration was worried by the skill gap, hence it flagged off the Master Craftsman Project in 2016.

Adebule, represented by the Permanent Secretary in her office, Mrs Yetunde Odejayi, said that the government had a vision of training 4,000 artisans.

According to her, the Master Craftsman Project was an initiative of the state government to bridge the skill gap, in order to prevent foreigners from taking over jobs of technicians in the built industry.

Adebule stated that the government was “determined to reverse the trend’’ of influx of foreign artisans, to ensure local artisans take back their pride of place in the built industry.

She said that the Master Craftsman Project was creating jobs and ensuring self-reliance among local artisans, adding that the government had provided required tools for the graduating artisans to promote hard work and integrity.

The Commissioner for Housing, Prince Gbolahan Lawal, said that the scheme was aimed at scaling up professionalism of artisans in the state, to meet up with current global trends.

Lawal said that the platform created an opportunity for artisans and workers in the construction industry to receive certificates after being trained to acquire 21st Century skills.

He said that issues of quackery, quality of service, inappropriate charges, and unethical conduct leading to building collapse were considered and built into the curriculum to produce world class artisans.

Also, Commissioner for Physical Planning and Urban Development, Rotimi Ogunleye, congratulated the grandaunts, whom he noted had become professionals and who should uphold construction ethics to stem incidence of building collapse.

He appealed to the grandaunts to place professionalism high above the selfish ambition of making quick profit, and to uphold efficiency.

“I want you to do your work with full sense of duty,” he said.

Seye Oladejo, the Commissioner of the State Ministry of Special Duties and Intergovernmental Relations, said the scheme “shows Lagos State Government is thinking in the right direction for the future”.

Oladejo said that world over, skills acquisition was the best form of empowerment and job creation strategy for economic development.

He called for support of residents toward sustenance of the good work.

Oladejo said that Lagos was too big to be an experiment and urged residents of Lagos to vote the candidates of the All Progressives Congress (APC) in Saturday’s election.

Mr Ayo Muritala, of the Knewrow  Performance Engineering, the firm that trained the artisans, commended the efforts of the state government and other stakeholders in the training.

He said that the firm was creating an app to help residents of Lagos locate professional artisans in their communities.

Muritala said that the firm was also creating a database of all qualified certified artisans and was issuing them customised identity cards to eliminate fraud.

He called on the state government to make it a policy to absorb all the trained artisans into its major projects.

“I hope you will make it a policy that 80 per cent of your artisans would come from Master Craftsman,’’ he said.

A female graduating welder, Folasayo Anjorin, speaking on behalf of the others, thanked the state government for the opportunity given them to better impact of the construction industry.

“On behalf of my colleagues here, I say a very big thank you,” she said.

Certificates were presented to grandaunts and their identity cards unveiled by the Deputy Governor’s representative.