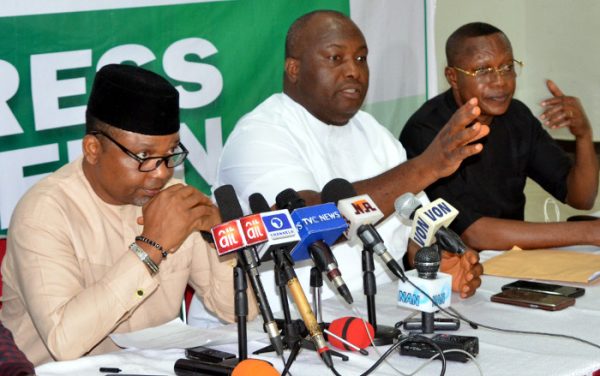 From left: Secretary General of the Transformation Ambassadors of Nigeria (TAN), Mr Chidi Omeje; National Coordinator, Dr Ifeanyi Ubah and a representative from Alaba International Market, Mr Amechi Obodo, during a news conference by TAN on endorsement the candidate of APC in Lagos State, Babajide Sanwo-Olu, in Abuja on Monday

The Transformation Ambassadors of Nigeria (TAN) has endorsed the candidate of the All Progressives Congress (APC),

for the Lagos State Gubernatorial elections.

In a briefing by TAN Secretary General, Mr Chidi Omeje and National Coordinator Ifeanyi Ubah on Monday, the group said that they were mobilising Igbos and other Lagosians for the APC candidate.

TAN said that the endorsement was a welI-thought decision that had become exigent after extensive deliberations and consultations with key stakeholders in Lagos state while giving due consideration to the manifesto of every contestant.

He said that the group had no doubt that Sanwo-Olu represents the “next level” Lagos state was in dire need of.

“He represents the vision and passion for a greater Lagos State and we are proud to have endorsed his candidature and eventual succession as the Governor of Lagos State.

“We are of the ardent belief that the strategic focus of Mr Sanwo-Olu’s administration will certainly build a better tomorrow filled with opportunities, unity and hope for Lagosians.

“A vote for Sanwo-Olu is a vote for economic prosperity, infrastructural development and most importantly, qualitative governance and institutional reforms.

“In light of the foregoing and by this press release, we hereby activate with immediate effect, all our political structures and mechanisms, door-to-door campaigners, market groups as well as other key groups and structures which have been used to achieve ground breaking and historic feats in Lagos State so as to ensure that Mr. Babajide Sanwo-Olu of the APC is returned elected as the next Governor of Lagos State, the group said.

The Secretary General while reading the text of the briefing, called on well-meaning Nigerians to join the group in working assiduously in a bid to install good governance at all levels.

“Let us all join hands to ensure that Lagos State attains the Next Level through the election of credible, competent. qualified and honorable men and women into political offices, under a free, fair and democratic process.

Responding to questions after the briefing, the Young Progressives Party (YPP) Senator-elect for Anambra South and Chairman of Capital Oil, Ifeanyi Ubah, said that they had widely consulted with Igbos in Lagos and were representing their decision.

Ubah who was worried that the endorsement may be misinterpreted as anti-party activity being a YPP candidate, stressed that TAN’s decision had nothing to do with party affiliation.

He described the endorsement as a discussion of people’s interest and TAN’s interest.

“TAN is a national platform but also we have our ethnic structure.

“For the Igbo in Lagos we are speaking for them, we have consulted them widely. We have told them why it is important to support APC structure and to vote in Sanwo-Olu come Saturday.

“Visible work starts tomorrow but we have done some underground work prior to this press briefing.

“The most important thing is that we will not want to have friction with the Yoruba or any other ethnic group in Lagos. I think we are coming in at this point in time to swiftly get involved by putting in a round peg in a round hole.

“You should know very well that if it were to be issue of party I will not be here speaking because I am mindful of anti-party as a candidate of YPP.

“I am here in the interest of our Board of Trustees and TAN structure, which have mandated me to speak on their behalf,” he said.