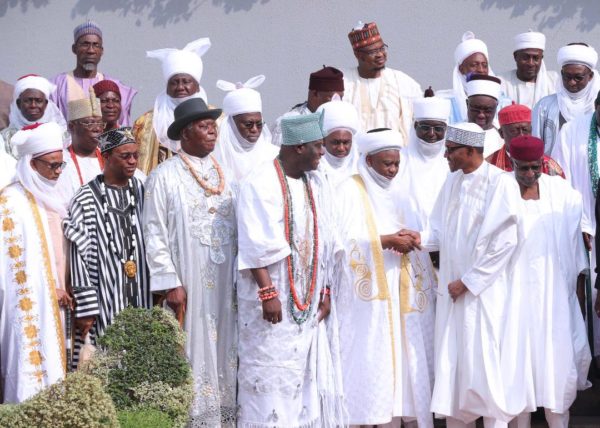 Sultan Saad Abubakar III said the re-election of President Muhammadu Buhari for another four-year term should be seen as what Almighty God had ordained and should not be challenged by anyone.

The Sultan spoke today in Abuja when he led the National Council of Traditional Rulers of Nigeria to Abuja to congratulate President Muhammadu Buhari. The Sultan is the national chairman of the council.

However, Atiku, who won in 17 states and the FCT to occupy the second position, insisted that he would challenge the result of the election in court.

But the Sultan described the result of the election as the will of the Almighty God.

“Your election as president for the second tenure should be seen as what God has destined which no man could have changed that destiny.

“This result is the will of the Almighty God and therefore we call on all to give you maximum support for the achievement of peace, development and progress of our dear nation.’’

The traditional ruler urged the president to reciprocate the gesture of the electorate by making sure that his administration continued to ensure justice and fairness in all its dealings with Nigerians irrespective of their geo-political backgrounds.

“We urge you Mr President to reciprocate by continuing to lead with justice and fairness as you openly said in your acceptance speech after the receipt of the certificate of return,’’ he said.

He stated that the council had resolved to continue to offer its unflinching support to the federal government’s cardinal objectives of transforming the economy, securing the country and the fight against corruption.

In his remarks, the co-chairman of the council and the Ooni of Ife, Adeyeye Enitan Ogunwusi, reaffirmed the Council’s determination to work closely with the government for the general good of the country.

He challenged the president to listen to criticism of his administration in `a very constructive manner’.

He added: “We know that you are very passionate about the people of this country especially the common people.

Responding, President Buhari sought for more understanding and support from the royal fathers.

The President, who thanked God for an opportunity to serve the nation for another four years, re-stated his belief in Nigeria’s multi-cultural population and the continued existence of Nigeria as an indivisible entity.

He said: “I am very happy that you have come to congratulate me for coming to my second and final term of office. I believe in this system, such a multi-national and multi-cultural country like Nigeria, a country with more than 250, 000 cultures.’’

According to the President, the traditional rulers have a big role to play in securing the country, because of their unique role in the society.

He, therefore, challenged them to always expose all criminals in their domains

“I realise that really if you want the security of the country, which is very important to us and one of our three main areas of focus. As traditional rulers, you know everybody in your constituencies and you know which family has hardened criminals and which family has respectable people so there is no way any government at any level can survive creditably without your support.

“This is the honest fact whether people accept it or not.

“So, we always depend on you because you know the weaknesses of our system and the society. We certainly need your cooperation on day to day basis to make sure that we consolidate on what we promised the whole country,’’ he added.