Ambode to Lagosians: Go out, vote on Saturday, you are safe 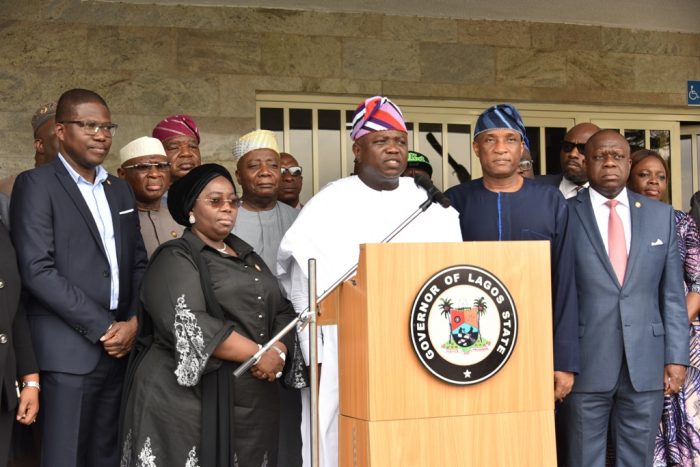 The Lagos State Government on Wednesday urged eligible voters in the State to come out en-masse on Saturday to vote in the Governorship and House of Assembly elections, assuring that adequate measures have been firmed up to ensure a hitch-free exercise.

Addressing Government House Correspondents after a Special State Executive Council Meeting at the Lagos House in Alausa, Ikeja, on the forthcoming polls, the State Governor, Mr Akinwunmi Ambode said every necessary arrangement to ensure a smooth voting exercise had been made, adding that the peace and security of the State was paramount to his administration.

“I want to assure that we would try as much as possible to ensure that the coming elections – gubernatorial and House of Assembly elections go very well. We want to also assure all Lagosians of their safety and also to let everyone know that Lagos is a cosmopolitan State and it will remain so.

“The peace and security of this State is very paramount to this government and we would ensure that everybody that is eligible to vote goes out to do so and keep the peace.

“We encourage all voters to come out on Saturday; I want to encourage all Lagosians to exercise their rights so that we can have a large turnout. The security agencies have assured us that there would be peace across the nooks and crannies of Lagos,” he said

The Governor, who is the Chairman of the State Executive Council, recalled the unfortunate incidences in some parts of the State during the Presidential and National Assembly elections, saying while such had been properly addressed, he would nonetheless want everybody to see each other as brothers.

He also urged the people to support the governorship candidate of All Progressives Congress (APC), Mr Babajide Sanwo-Olu and all the House of Assembly candidates of the party to ensure continuity of good governance in the State.

According to him, “We are also very aware of the incidences that happened during the presidential election of which we have taken proper care of. We know that we are all brothers; we are all the same in this State but I urge everyone to support our government and also support our candidate because we believe in continuity in this government and that is why you see that the executive arm of government is in support of Jide Sanwo-Olu who is our flagbearer for the APC.

“We urge all Lagosians to vote for continuity and ensure that all our candidates for the House of Assembly elections also are voted for. I wish all of us a very successful voting process on Saturday and then we implore all our security agencies also to make sure that there is peace across the land.”

Besides, Governor Ambode who addressed the briefing alongside members of the State Executive Council, also clarified the news on social media to the effect that a public holiday had been declared for Civil Servants on Friday to prepare for the elections.

“We like to inform all Lagosians that contrary to what has been put in the media that there would be a public holiday on Friday, what we have actually done was to declare mid-term holiday for students across all our schools in Lagos State,” the Governor said.