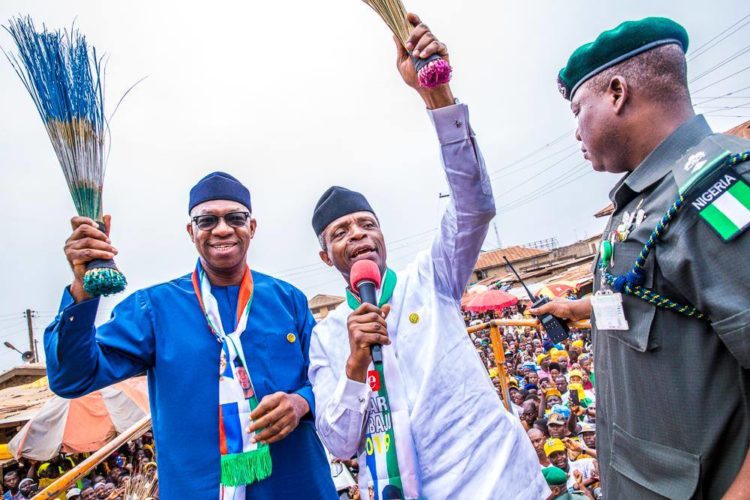 Vice President Yemi Osinbajo has given an assurance to scared voters in Ogun that the elections would be peaceful.

Osinbajo gave the assurance at a mega rally organised by the All Progressives Congress (APC) in the Abeokuta-South council area of the state.

He said the assurance had become necessary to allay the fears of the people and to encourage them to troop out and exercise their civic rights on Saturday.

Osinbajo told the people to discountenance threats raised in some quarters that hoodlums would be unleashed across the state to intimidate electorate to the advantage of a particular party.

Osinbajo who commended the APC members in the state for voting for the re-election of President Muhammadu Buhari, urged them to replicate the party’s victory in the state by voting massively for the APC governorship candidate, Prince Dapo Abiodun.

A former governor of the state and a chieftain of the party, Chief Segun Osoba, also reiterated the determination of the federal government to ensure peaceful conduct of the polls in the state.

He said that security officials would begin an exercise of Show of Force across the state to display and demonstrate their presence and to give warning to potential hoodlums.

The APC candidate, Abiodun, in his remarks gave assurance that he would ensure that the state is moved to an enviable height if elected as governor.

Ogun has been considered as one of the flashpoint states concerning the 2019 polls.

The development followed Buhari’s presidential campaign in the state which turned violent and chaotic after being hijacked by hoodlums who were hurling stones at the leaders and chieftains of the party .

Several clashes among rival political parties, particularly between the APC and the Allied Peoples Movement (APM) sponsored by the state governor, Sen. ibikunle Amosun, during political campaigns, also contributed to the unease in the state.

The police had since then sent three additional Commissioners of Police to the state to beef up security for the Presidential and the National Assembly polls as well as the governorship and the House of Assembly elections in the state.

Wednesday rally commenced in the evening with members dancing moving round major areas of the Abeokuta metropolis including, Salon, Lafenwa, Kuto, Isabo, Ibara, Panseke and later converged beside the Centenary Hall at Ake.