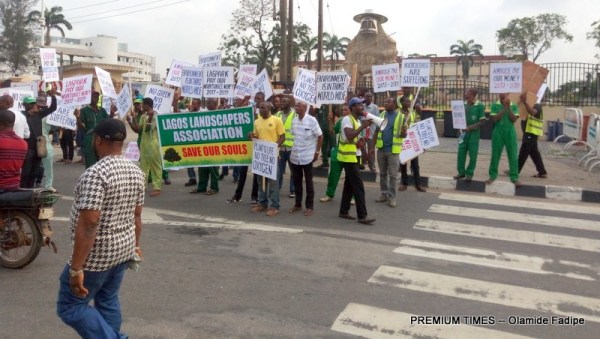 Members of the Lagos Landscapers Association, an association comprising contract horticulturist and gardeners working for the Lagos State Parks and Gardens Agency (LASPARK) on Wednesday led a protest to the Lagos State House of Assembly, in Ikeja, over unpaid allowances owed it by the agency.

The chairman of the association, Adesoji Adelowokan, while speaking to journalists at the protest ground said the agency has been owing them allowances since 2017, paying only six months arrears in 2018.

“The landscapers association are a body of contractors working for LASPARK,” Mr Adelowokan said.

“Normally when the agency was established, we were getting our payments as at when due, but unfortunately, since this new era, for the first 16 months we were not paid and at the end of the day, they gave us some small money and we even lost money in the process, … we lost about three months of our money.”

“Since January 2018, we struggled and struggled to avoid something like this from happening and we got payment for the first quarter in August 2018 and we run around again to get the second quarter and from that time, nothing again.”

Mr Adelowokan also said members of the association fear that their monies would no longer be paid after the transition of government in the state.

“What we were supposed to collect since 2015 was paid in 2017 and now they are owing us another six months for last year and the three months in this year making 9 months, plus 2017. We have been trying to restrain ourselves from coming public like this, thinking that we will be able to work underground to solve the problem.

“But transition is coming now and we know what is going to happen if we don’t come out like this for the whole world to see. And, we may not get another money for the next 16 months, that is why we have come to make our grievances known to whoever (is the) authority that (they) should do the right thing.”

“The GM of LASPARK, Madam Abiola, is not even around. I think she is on leave but we have an acting GM who is just a civil servant and cannot do anything when some issues are down and that is the truth.

“That was where we were going before to find out what was happening and they told us our papers are on the table of the governor, since last year. We met with the commissioner, Durosinmi Eti, last year about it. He pacified us and am sure his intervention contributed to the money we saw in August.”

“Right now, we don’t even know where we stand. Workers, we cannot pay. Tools, we cannot replace or buy new ones. What we have always been told is that our file is on the table of the governor, so, let the governor give us our money.”

“All the gardens, landscaping, beautification you see all over Lagos are the work of these people. They create the landscape, they tend to these gardens and for 2017, 2018 third and fourth quarter, up till now, they have not been paid.”

“They only came out to hold this peaceful protest, at least, to make Lagos, the governor and the Lagos State House of Assembly aware that they have been working and they have not been paid. They are suffering, some of them have had to get loans from the bank to do these jobs, some of them are owing banks seriously.

“One or two persons amongst them is dead while waiting for this money. Unfortunately, this is the only way they can come and make the governor and the Lagos State House of Assembly aware that they have not been paid.

“Several meetings have been held not with the governor (and) LASPARK and they keep promising that this money has been approved but nothing has been done ever since. After this protest, we would have to wait. We cannot pre-empt the next action but at least, with this, the governor is aware and the members of the Lagos State House of Assembly are aware. So, let’s wait and see what comes out of this.”

“These people work and they don’t get their pay. Those working under them, the labourers, gardeners, cleaning up Lagos and ensuring that they contribute in keeping Lagos green. We all know what climate change is all about and one of the ways they contribute to ensure that Lagos is not heated up is to keep the grasses green and the trees up for clean oxygen. If this was not the case, we don’t know how the weather in Lagos will be.”

A member at the protest ground, who declined to give his name, also said that if the authorities in charge want them to beg for their allowances, they are willing to beg them so far their allowances get paid because it is no longer bearable for them.

“We know this is dying minute but we want them to find a place in their heart to consider us. We can’t see government parastatals receiving alert and driving big cars but those behind the job are not being paid, we want the government to consider horticulturist and gardeners and pay us too.”

“We have always been agitating but we are coming now because it is already too much, we can’t take it anymore. This is dying minute. Everybody is tidying up to leave the government, another government will come and the ones there now will go with the money. We are even begging them to pay us if they want us to beg.”

“We can’t be talking about elections only and moving government forward. LASPARK is also part of it. Beautification is also part of moving Lagos to a greater place so they have to do something for those behind it and suffering from it.”

However, an official of LASPARK who craved anonymity, said the issue is also affecting other government agencies as well and not peculiar to LASPARK alone.

“I am not sure the government is owing them that much but we have been calling for meetings and had made our position known to them that the state government will pay them very soon,” the official said.

“You know the system has the way it works and they are stakeholders as well, contributing to the government of Lagos State. Presently, the budget has not been passed and this is one of the reasons for the delay.

“We have tabled their matter and the governor has assured us that something will be done about it soon. It is not only this agency that is affected. They are under the net payment of Lagos and we cannot discard them like that. So far, they are duly registered, change of government or not, they will eventually get paid.”

When asked if the duration the workers claim the agency is owing them is true, the official said he could not confirm if they have arrears from 2017 but that they are indeed being owed for 2018.