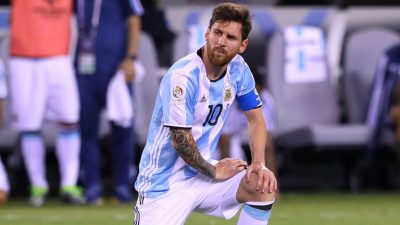 Lionel Messi has been named in the Argentina squad for the first time since the 2018 World Cup.

The Barcelona forward, 31, has missed six international friendlies following defeat by eventual winners France in the last 16 in Russia in June.

He is part of a 31-man squad for friendlies against Venezuela and Morocco this month.

Paris St-Germain midfielder Angel di Maria, 31, has also been recalled for the first time since the World Cup.

However, Spurs winger Erik Lamela and goalkeeper Paulo Gazzaniga have both been dropped.

Inter Milan striker Mauro Icardi has also been left out, having not played since 9 February because of an ongoing dispute with the Serie A club.

The five-time Ballon d’Or winner’s only major international honour is Olympic gold at the 2008 Games in Beijing, having lost three Copa America finals and been beaten by Germany in the 2014 World Cup final.

Argentina face Venezuela in Madrid at 01:00 GMT on 23 March before playing Morocco in Tangier on 26 March.

The 2019 Copa America runs from 14 June to 7 July in Brazil, with Argentina drawn in Group B alongside Colombia, Paraguay and 2022 World Cup hosts Qatar.