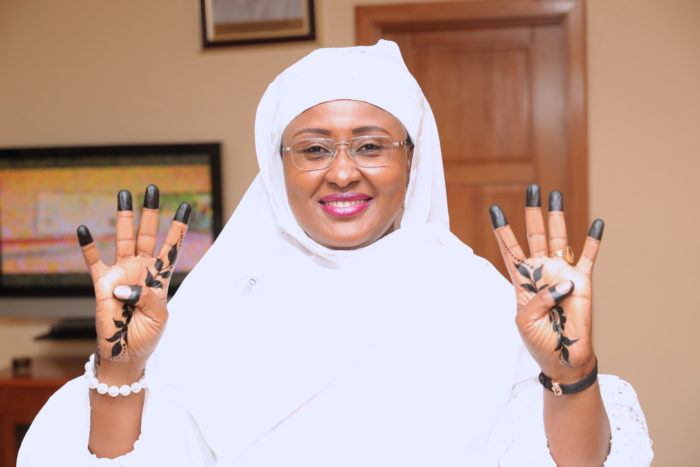 Hajia Aisha Buhari, wife of President Muhammadu Buhari, on Thursday commended Nigerians for re-electing her husband for a second tenure in office .

Mrs. Buhari made the commendation in Daura, in an address at a dinner she organised to mark the electoral victory of her husband .

She particularly commended women and youths for making the feat possible, and described them as the vanguard of positive change and transformation.

The President’s wife promised to continue to support women and youth in empowerment programmes, health issues and education.

In his remarks, the Minister of State for Aviation, Alhaji Hadi Sirika, also commended the resilience and doggedness of Nigerians that ensured a second term for Buhari.

He described Buhari as “a strict disciplinarian, who abhors injustice and dishonesty”.

“Buhari is committed and determined to fight corruption. He also wants to promote agriculture and improve security, especially in the rural areas,” he said.

He said that Buhari’s anti-corruption polices had made impacts in the executive, legislative and judicial arms of government, saying that the president had instilled due process, probity and accountability in all sectors.

In a brief address, Sen. Ahmed Babba-Kaita assured Nigerians of the determination of the 9th assembly to support President Muhammad Buhari to succeed .

He lauded the efforts of the president’s wife toward a better life for the poor via her pet projects, and promised to continue to support such efforts.

Hajiya Zakiya Aminu Masari, wife of Katsina governor, assured Mrs. Buhari of the support and commitments of millions of women and youths toward the success of the Buhari administration.

The News Agency of Nigeria (NAN), reports that thousands of women and youths from different parts of Nigeria attended the event held at the Daura township stadium .

Highlights of the event included musical entertainments, speeches, traditional and modern dances, and various other shows.