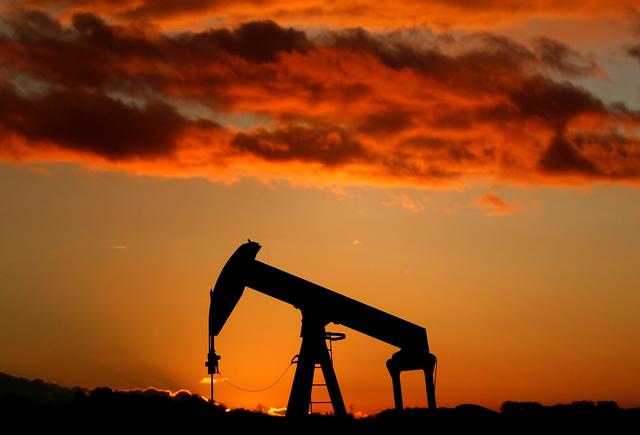 An oil pump seen at sunset outside Scheibenhard, near Strasbourg, France, Oct. 6, 2017

With surging U.S. supply also unsettling markets, international benchmark Brent crude futures were at 65.78 dollars per barrel at 0528 GMT, down 52 cents, or 0.8 per cent from their last close.

Financial markets, including crude oil futures, took a hit after ECB President Mario Draghi said on Thursday the economy was in “a period of continued weakness and pervasive uncertainty”.

Europe’s economic weakness comes as growth in Asia is also slowing down.

So far oil demand has held up, especially in China where imports of crude remain above 10 million barrels per day (bpd).

Yet a slowdown in economic growth will at some point likely dent fuel demand, putting pressure prices.

On the supply side, prices have been receiving support this year from output cuts led by the Organization of the Petroleum Exporting Countries (OPEC).

Together with some non-affiliated producers like Russia, the producer group has pledged to withhold around 1.2 million barrels per day (bpd) of supply to tighten markets and prop up prices.

But these efforts are being undermined by soaring U.S. crude oil production, which has increased by more than 2 million bpd since early 2018, to an unprecedented 12.1 million bpd.

That makes America the world’s biggest producer, ahead of Russia and Saudi Arabia.

Investment bank Jefferies said on Friday that U.S. output growth was largely being fueled by onshore shale production, which had recently benefited from an expansion driven by investments from oil majors Exxon Mobil and Chevron.

“The majors bring scale, steady capital investment and science to the play and could lead the basin to a higher growth trajectory – which in turn could cap the upside in oil prices,” the U.S. bank said.

The consultancy said “U.S. oil production…will grow by close to another 1 million bpd in 2019.”

Rystad said this export surge would have huge benefits for the U.S. economy.

“The U.S. trade deficit will evaporate, and its foreign debt will be paid quickly thanks to the swift rise of American oil and gas net exports,” said Rystad Energy senior partner Per Magnus Nysveen. (Reuters/NAN)