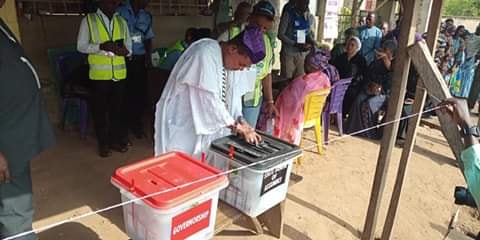 The monarch, who commended INEC, stated that Oyo town had been peaceful while security personnel had been deployed to patrol the town.

Alhaji Sharafadeen Alli, governorship candidate of Zenith Labour Party (ZLP), who stepped down for Seyi Makinde of the PDP, cast his vote around 10.04am at Ward 3, Unit 22, Okearemo, Yemetu area, Ibadan North.

They all urged voters to come out and vote for their candidates as the election is going on peacefully.
END