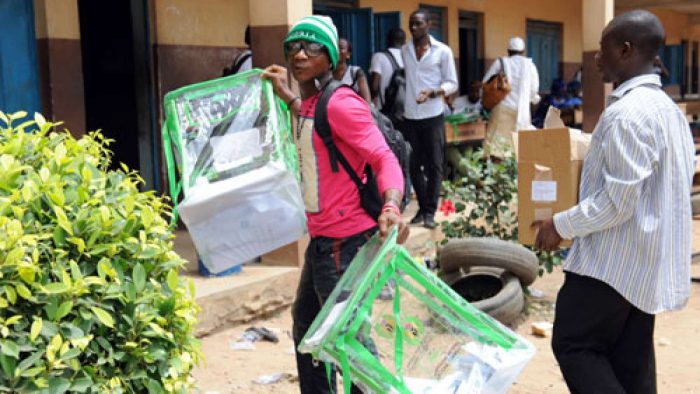 Some armed thugs in police and army uniforms invaded polling units in Adankolo community in Lokoja, shooting sporadically to scare away voters on the queue.

A news correspondent reports that the armed hoodlums arrived in a van and immediately started shooting.

Voters and electoral officers scampered to safety, a development which made it possible for the thugs to carry away ballot boxes, ballot papers and other sensitive election materials.

Also at the Polling Unit in NEPA area in Lokoja, the hoodlums, some of whom were masked, also made away with election materials after scaring away INEC officials and voters.

Other areas under the siege of armed thugs were polling units in Ward A in Lokoja Constituency 1.

At Okengwe Polling Unit in Okene Local Government, voting was temporarily disrupted when hoodlums attempted to snatch ballot boxes and other election materials.

There had been fears about the possibility of an armed attack on the election day among residents before now.

One of the candidates contesting for a seat in the state House of Assembly had earlier raised the alarm over plans by some elements to disrupt election in the ward.

The candidate, Mr Suleiman Babadoko of the PDP, had appealed to the police and DSS to quickly move in to stop the violence.