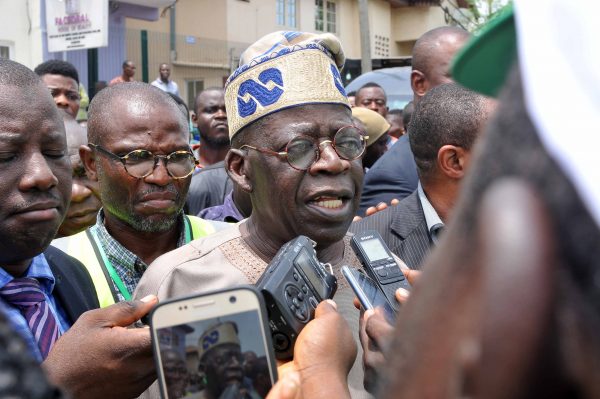 National Leader of the All Progressives Congress (APC), Asiwaju Bola Tinubu has called for the extension of voting time in the ongoing governorship election in the state.

Tinubu called for extension of time shortly after voting at his polling unit at Sunday Adigun Street in Alausa, Ikeja Lagos State.

“The information reaching me is that they (INEC) started late in most places and I don’t know why that should be. As a result, I believe INEC should extend the time. They should extend the time to accommodate those who have persevered and waited to vote for the candidates of their choice,” he stated.

On the low turnout of voters across the state, Tinubu described it as an unusual situation. According to him, the politicians need to devise means of encouraging people to always come out to vote during elections.
“The people need to be aware of the units and they should be carried along, he added.

He commended the peaceful conduct of the election and condemned the media reports of the Okota violence incident during the Feb.23 Presidential and National Assembly elections.

“So far, it is violence free. And I take exception of the Okota incident two weeks ago. I am very upset about that. As if we were violent people. You have 1,325 polling units and only five units were affected by Okota incident. But, to you people, it is only the incident that is story.

When he was asked about the hope of his party, APC, considering the ‘o to ge’ slogan of a section of the opposition in the state, he had this to say:
”
”In Lagos? Lagos has seen tremendous development since i was a governor. The monthly internally generated revenue of this state was N600m, today it is over N30 billion. No state has achieved financial independence as Lagos, no other nation. They depend on allocation from federal government. Lagos today will not depend on any allocation before we take care of our capital needs.

“We build roads everywhere across the state. The real estate value of Lagos State property owners has exponentially gone better than every other state of this country. Lagos State is the 5th largest economy in West Africa.

“Let me see who is the governor, who is the leader who has done that”.

When asked if he was afraid that his party is threatened in its stronghold by the ‘O to ge’ song, Tinubu declared: “Lagos is not Kwara. Are we from Kwara? He then joked and said to the reporter who asked the question: “You have been in Lagos, let me ask your medium to transfer you to Kwara”. This received rousing laughter from the crowd.

“There is a limit to copycat. Lagos should be O tope”.

When asked if he was sure of victory, he enthused, “We are going to win. We are the only party in Lagos. The rest are repeaters. Every four years they come out and they go back to their shell after elections”

“Where is the threat? PDP in Lagos continues to behave like leopard that can never change its skin. We belong to the progressives, we are progressives and we are going to win this election,” he concluded.