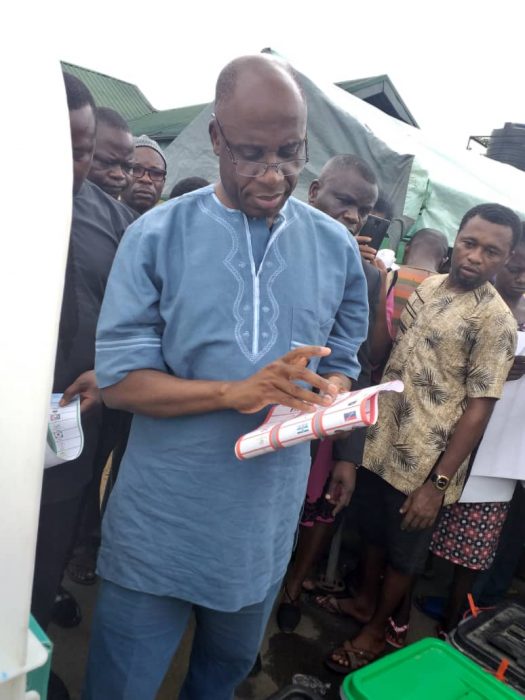 Former Governor of Rivers State and Minister of Transportation, Rt. Hon. Chibuike Rotimi Amaechi has described the Governorship and State House of Assembly elections in the State as relatively peaceful.

Amaechi, who is also the leader of the All Progressive Congress in the State, said his assertion was predicated on the fact that there had been no record of violence compared to what was witnessed in previous elections in the State.

Speaking to newsmen in his country home, Ubima, Ward 8, Unit 14, in Ikwerre Local Government Area of the State, where he voted for his choice candidates for both the Governorship and State House of Assembly elections on Saturday, Amaechi commended the Police, the Military and other security agencies for keeping the peace.

“So far, we have not heard of any shootings and killings . We are completely happy that the Army and the Police are everywhere maintaining the peace. We have held elections in Rivers State where over fifteen to twenty persons were killed but this is the only election that has recorded peace and it is because of the presence of the Military.

“The militants have fled because of the presence of the Military and we are voting peacefully. And you know, one thing about the Soldiers is that they are apolitical, they are neither supporting APC nor AAC or PDP. What they are doing is to maintain peace and ensure that nobody disrupts the process. I think we will prefer to have this kind of election where everybody is having peace,” Amaechi explained.

Although he alleged that the Independent National Electoral Commission, INEC compromised by recruiting card carrying members of the PDP as its adhoc staff, Amaechi insisted that the peace and tranquility experienced during the exercise was enough to adjudge the polls as peaceful compared to past elections.

His words: “Beyond the fact that the Resident Electoral Commissioner (REC) in Rivers State recruited PDP members as adhoc staff, I think the process is a bit straight forward. For instance, in Khana LGA, the people are refusing to vote because all the adhoc staff are known members of the PDP and the electorates have said they would not vote until INEC changes the adhoc staff. So, the point remains that if not for the bias of INEC one would say that the election is to a great extent free and fair because nobody is intimidating the people and there is relative peace. But, unfortunately, the REC is an unrepentant a PDP member.”

Amaechi also, lashed out at his successor, Governor Nyesom Wike for being ‘too desperate for power.’ He stressed that the Governor sits in his comfort zone and watch his people being killed recklessly.

“Wike doesn’t like the fact that the Military is maintaining peace, whereas, he stays in Government House with his own security and people are dying on the streets of Port Harcourt. Wike is so desperate about power. Just yesterday (Friday) PDP thugs killed two people in my mother’s village… The Governor says there is voter apathy because of Soldiers’ presence. There is no time we don’t have voter apathy in Rivers State. What usually happens is they (PDP) write results and announce, now they are not opportune to write results. The Army will escort the materials to the collation centre,” Amaechi noted.