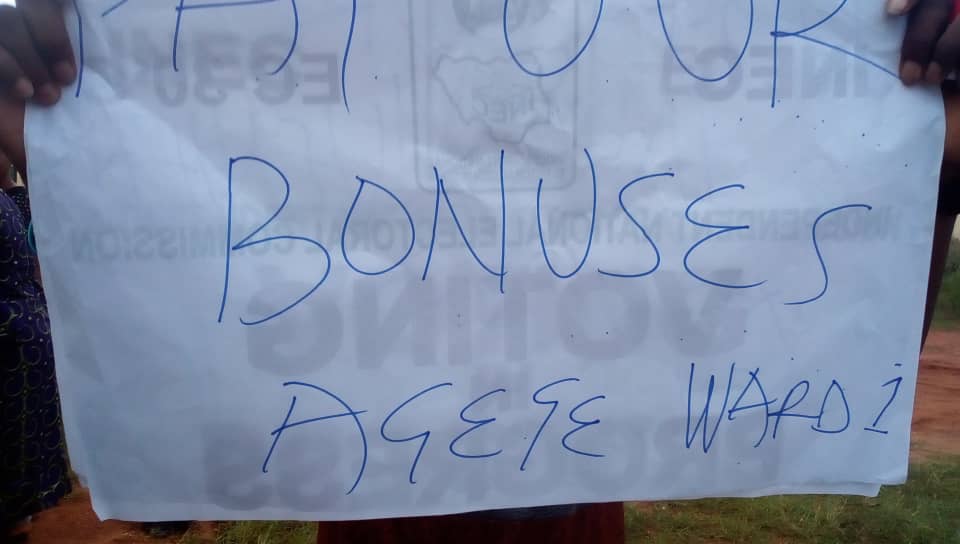 One of the placards carried by the protesting INEC officials

Scores of adhoc staff and corps members attached to Ward 1, Anwar Islam Agege early this morning staged a protest over non payment of their allowances by the Independent National Electoral Commission (INEC)

The protest started at 6:30am. Corps members and other electoral officials were seen carrying placards demanding payment of their unpaid allowances.

Some of the placards read: “pay our inconvenience allowance, pay our bonuses Agege ward 1. How can we be working and not receiving our due entitlements.”

An adhoc staff told PMNEWS that they would not go to their polling units until they received a concrete assurance that the allowances would be paid.

”Those holding our money should release them immediately,” another corps member stated.

The Chairman of Agege local government, Alhaji Egunjobi later addressed the INEC officials and promised to ensure the payment of their allowances.

Today’s governorship and house of assembly elections could also be delayed in parts of Ejigbo, in Oshodi-Isolo LCDA, as INEC ad-hoc staff are currently protesting over the non-payment of their allowances.

In Lagos, today's governorship and house of assembly elections could be delayed in parts of Ejigbo, in Oshodi-Isolo LCDA, as INEC ad-hoc staff are currently protesting over the non-payment of their allowances. #TGNElectionWatch #NigeriaDecides2019 #NigeriaDecides #Nigeria #INEC pic.twitter.com/EEDTJQJI6W