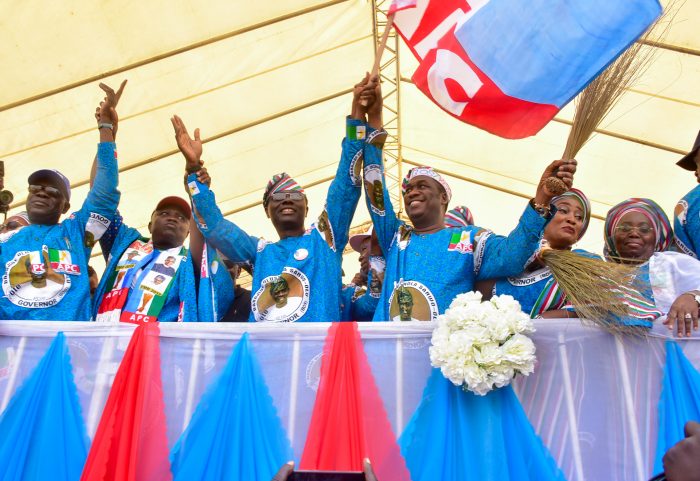 The Independent National Electoral Commission (INEC), on Sunday declared candidates of the All Progressives Congress (APC) winners of Lagos Mainland House of Assembly Constituencies I and II in Lagos State.

The News Agency of Nigeria reports that the results were declared at the Lagos Mainland state constituency collation centre situated at St. Agnes Primary School, Sabo-Yaba.

Adenuga of the Department of Public Administration, University of Lagos said that the total number of accredited voters was 22,594, total votes cast, 22, 499, total valid votes, 21,442 while the total rejected votes was 1057.

According to her, AD scored 110 votes, ADP got 95, ADC had 48 votes, Accord Party 21 votes while other parties in the contest scored less than 20 votes.

She said: “Based on the number of scores of candidates, Owolabi Ibrahim Ajani Olatunbunsun of APC having scored the highest votes of 17, 239 is declared winner of Mainland Constituency I.”

The returning officer said:”That Moshood Olanrewaju Oshun of APC having satisfied the requirements of the law and scored the highest number of votes is hereby declared the winner and he is returned elected.”

The News Agency of Nigeria (NAN) reports that the party agents took turn to sign the results.

Reacting, Mr Oladele Adekanye, the APC party agent, Mainland constituency I, expressed satisfaction over the conduct and collation of the election results, saying INEC had improved the process and vote now count.

However, Mr Malomo Adelabi, the PDP agent at the collation center, claimed that there was what he called “systemic rigging”, during the election as card readers failed to read voters’ biometrics, hence many voted with cards that were not theirs.