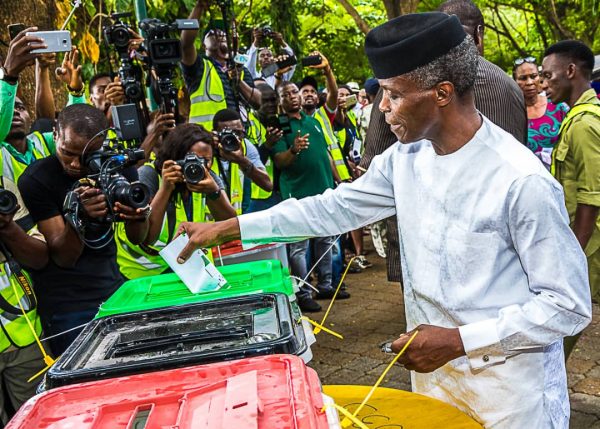 Osinbajo: After all the razzmatazz he lost to Atiku

The All Progressives Congress has won both the governorship and House of Assembly elections in the polling unit of Vice President Yemi Osinbajo in Lagos State on Saturday.

Sanwo-Olu’s main challenger Jimi Agbaje of the Peoples Democratic Party polled 190 votes. In the State House of Assembly the APC finished with 193 votes while the PDP candidate had 175 votes.

Results announced at his polling unit shortly after collation showed that the oil magnate had established a healthy lead in his local government area of Ikenne.

At his polling unit in Ward 3 Unit 2, Ita Osanyin, Iperu, Ikenne, Mr. Abiodun polled a total of 240 votes while his closest challenger, Honourable Adekunle Akinlade of the Allied Peoples Movement (APM) got 71 votes.

At the polling unit of Mr. Akinlade, the APM lost to the APC.

Results’ trickling in across the State shows that the APC is leading the APM and other parties by a rather healthy margin.

Below are other results from Ogun State.