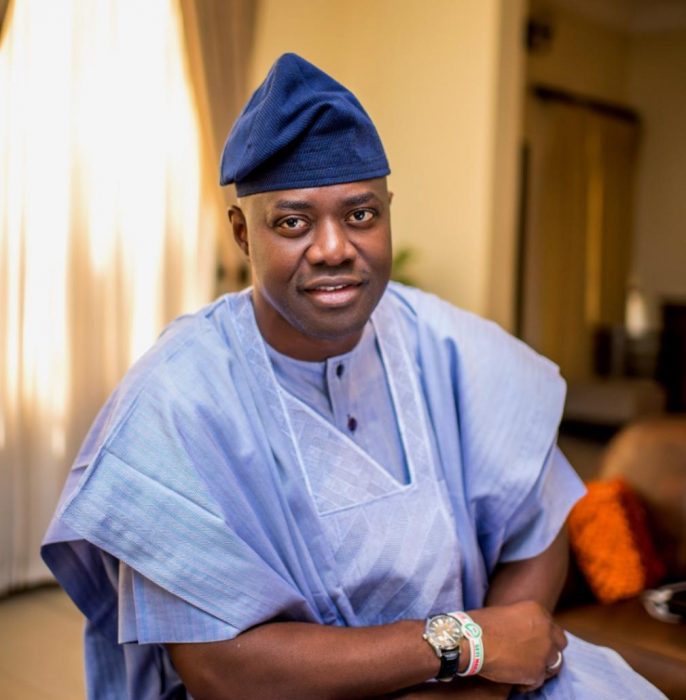 The outgoing Governor of Oyo State, Senator Abiola Ajimobi and his party, All Progressives Congress, APC, in Oyo State have congratulated the victorious governorship candidate of the People’s Democratic Party, PDP, Engineer Seyi Makinde, who was declared winner of Saturday’s keenly contested election by the Independent National Electoral Commission, INEC.

In a congratulatory message, Special Adviser on Communication and Strategy, Mr Bolaji Tunji, quoted the governor as saying that now that the elections are over, Makinde should ensure that all stakeholders were carried along in his administration.

The governor urged Makinde to start getting prepared for the onerous task of governance by putting behind him all the electioneering acrimonies and prevail on his followers and supporters to guard against acts and utterances capable of igniting crisis in the state.

T stated, “In the last eight years, we have ensured adherence to the rule of law. We have done a lot to ensure the growth and development of our dear state through our visible unprecedented achievements, as acclaimed by the masses of Oyo State and the outside world. While congratulating you and wishing you a successful tenure, I enjoin you to focus on the sustained development of our state in the areas of peace, security, as well as safety of lives and property that the state has enjoyed in the last eight years. I extend to you the right hand of fellowship and promise to avail you my wealth of experience on critical developmental and governance matrix for the continued growth of our dear state and for the betterment of the lives of the entire citizens of the state. Since the duty of every government is to create the enabling environment for businesses to thrive and for citizens to go about their lawful duties under a peaceful and secure environment, may I advise that you leverage on our widely-acclaimed achievements in these areas”.

Also, in a statement released by the APC Publicity Secretary, Dr AbdulAzeez Olatunde, the party congratulated its gubernatorial candidate, Oloye Bayo Adelabu and the Governor elect for a good race and a well fought battle at the polls, concluding that an election is not a do or die affair while respecting the declaration of the electoral umpire.

The party equally appreciated its party faithful, supporters and voters in the recent National and State elections.

According to the Oyo APC spokesperson, “The elections have come and gone, won and lost and the people of Oyo State have spoken. We respect the INEC declaration of Engr. Seyi Makinde as the Governor elect and wish to congratulate him. Similarly, we commend the gallantry of Chief Adebayo Adelabu who gave a good account of not only himself but the APC in Oyo State. Our commendation also goes to all the victorious candidates in our party. Meanwhile, we will watch developments and use this opportunity to appeal to our party members and supporters to be calm and conduct themselves in a peaceful manner as the unprecedented eight year tenure of the APC led by Governor Abiola Ajimobi has been a season of peace, safety and security which yielded monumental developments in various sectors of the state’s economy”.

The party’s statement also decried and condemned the recent spate of violence witnessed in the last 48 hours in the state, emphasizing that it would be unfortunate if the state returns to the era of violence, brigandage and chaos with the turn of the PDP being in charge.

It further reminded the perpetrators of violence that the APC government is still in charge of the state and no one should seize the opportunity of victory at the polls to take laws into their hands.