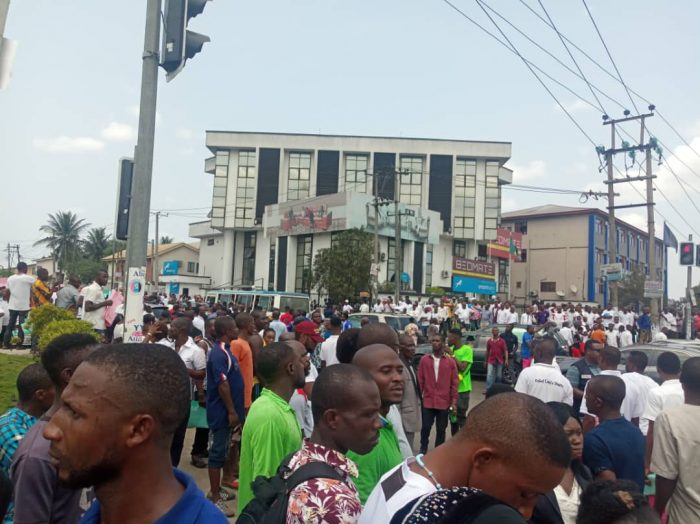 A coalition of stakeholders of the All Progressives Congress, APC and Africa Action Congress, AAC in Rivers State on Monday staged a peaceful protest asking the Independent National Electoral Commission, INEC, to declared the results already collated from the wards and local government and announced the winner immediately.

The protesters first gathered at the Port Harcourt Polo Club before marching towards the popular GRA junction, where they terminated.

They carried placards which read; “Declared collated results,” “Obog Effanga, Rivers REC must go,” “APC will not accept concocted results,” among others.

Omenazu, who later spoke on behalf of the protesters warned that INEC, as an umpire must be see to be free and fair.

He said INEC seemed to be adopting a trend whereby whenever PDP was seen to be losing an election in the state, results were not announced.

He called for the sack of Rivers REC for his alleged partisanship in favour of PDP.

He cited the by-election into Port Harcourt Constituency 3 which was suspended to date because of the excuse that there was violence.

Due to the strong security barricade at INEC office some metres away, the demonstrators stopped at the GRA junction along the Port Harcourt/Aba Expressway where INEC is located and peacefully dispersed.

However, Emma Okah, Spokesman of Governor Nyesom Wike Campaign Council, and also Commissioner for Information and Communications, has alleged that there was pressure on INEC Chairman, Prof. Mahmood Yakubu to change the Rivers Resident Electoral Commissioner, Obo Effanga, and Administrative Secretary to pave way for INEC to allegedly to announce fake Governorship results.