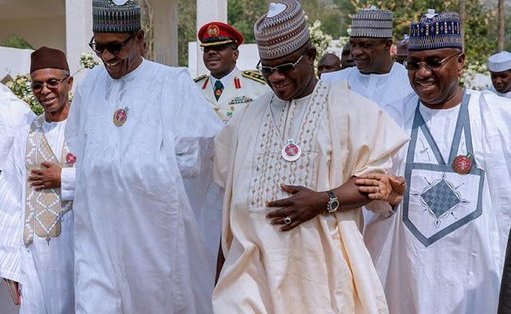 Buhari with some governors

Seven governors of the All Progressives Congress, APC, on Tuesday met with President Muhammadu Buhari at the Presidential Villa, Abuja.

The aim of the meeting was unknown, but it may not be unconnected with the governorship polls at the weekend and the victory of the governors in their various states.

It was, however, reliably gathered that the meeting might have discussed the aftermaths of the March 9 governorship and state assembly elections held in 29 states of the federation on March 9.

The Independent National Electoral Commission (INEC) had declared six governorship elections in Adamawa, Bauchi, Benue, Plateau, Kano and Sokoto inconclusive while all electoral processes were suspended in Rivers by the commission.

INEC is to announce new dates for the conduct of the re-run elections in the affected states.

The APC serving governors whose elections were declared inconclusive include Mohammed Abubakar of Bauchi state, Abdullahi Ganduje of Kano state and Jibrila Bindo of Adamawa state.

The affected governors also used the opportunity of the meeting with the president to congratulate him on his re-election for a fresh four-term.