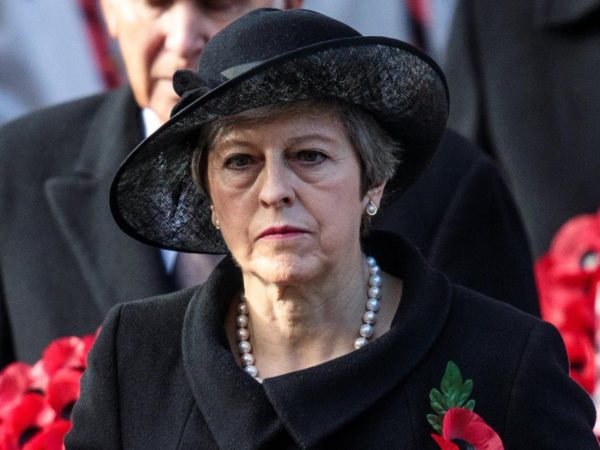 Theresa May: More troubles for the Prime Minister over Brexit

Sterling rallied on Tuesday on speculation that British Prime Minister Theresa May might be closer to securing approval for her Brexit deal after the European Commission agreed to some changes to it ahead of a vote in the British parliament.

The pound jumped as high as 1.3290 dollar as May won legally binding Brexit assurances from the European Union, in a last ditch attempt to sway rebellious British lawmakers who have threatened to vote down her divorce deal.

“The market was sensitive to positive news rather than negative news as it had already priced in very bad scenarios,” said Masafumi Yamamoto, chief currency strategist at Mizuho Securities in Tokyo.

Yamamoto said the likelihood remained low that British lawmakers would now agree to May’s deal in a vote expected later on Tuesday, just over two weeks before Britain’s scheduled March 29 departure from the European Union.

After paring some of its earlier gains, sterling was last trading half a percent higher on the day at 1.3214 dollar. It was still up 2.1 per cent from a low of 1.2945 dollar at one stage on Monday.

The euro slipped to its lowest on the pound since May 2017 at 84.71 pence, before recovering the losses somewhat. It was last quoted down one-third of a percent at 85.19 pence.

Most other currencies stayed within familiar trading ranges before U.S. February inflation figures due at 1230 GMT.

Market sentiment received a modest boost after data on Monday showed U.S. retail sales rose moderately in January, lifted by an increase in purchases of building materials and discretionary spending.

The dollar index, which measures the greenback against a basket of six rivals, was down 0.2 per cent at 97.056 as some investors bought riskier assets.

However, the dollar tacked on 0.2 per cent against the Japanese yen to 111.41 yen on the back of the improved appetite for risk.

If May loses the vote on her Brexit deal on Tuesday, she has said lawmakers will get a vote on Wednesday on whether to leave the EU without a deal and, if they reject that, then a vote on whether to ask for a limited delay to Brexit.

At a joint news conference with E.U. Commission head Jean-Claude Juncker late on Monday, May announced three documents aimed at addressing the most contentious part of the exit deal she agreed in November – the Irish backstop.

“Seeing them together in the same screen is a positive – that there is some hand holding there and working together to move forward,” said Bart Wakabayashi, Tokyo branch manager at State Street Bank.

The Irish backstop is an insurance policy aimed at avoiding controls on the sensitive border between the British province of Northern Ireland and EU member Ireland.

“If they can break (the backstop) down to a level where there can be some negotiation or at least compromise on both sides, there definitely does seem (to be) light at the end of the tunnel,” added Wakabayashi.

The euro, which has struggled recently in line with a sputtering euro zone economy, found a measure of support on the improved sentiment and the Brexit news.

The single currency was last up 0.1 percent at 1.1259 dollar, extending recent gains to a third session. (Reuters/NAN)