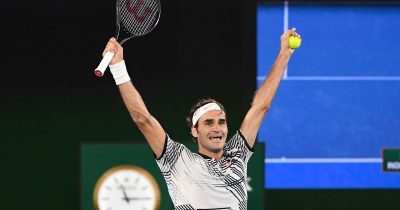 Roger Federer used variety and old-fashioned consistency to avoid the upset bug on Tuesday night at the BNP Paribas Open in Indian Wells.

According to reports on the ATP website, the five-time champion continued his dominance against friend and compatriot Stan Wawrinka, advancing 6-3, 6-4 to beat Stan The Man for the sixth consecutive time and the 22nd in their FedEx ATP Head2Head series (22-3).

Federer has won all 17 of their hard-court matchups, including four in Indian Wells.

But it was all rather serious for the Swiss rivals in Stadium 1. Federer controlled the baseline rallies, forcing Wawrinka to match his groundstroke depth and speed.

At 2-3, Wawrinka tossed in a forgettable game and handed Federer the break to love with a shanked forehand.

The 37-year-old closed out the set with a point that surely made two-time champion Pete Sampras, in attendance in the Champions Club once more crack a smile.

Federer served and volleyed to wrap up the 28-minute set.

The last time they met on hard court at the ATP Masters 1000 in Cincinnati last August, Wawrinka pushed Federer to three sets.

“Its always a thrill playing in Indian Wells,” Federer said.

Earlier in Stadium 1, five-time champion Novak Djokovic fell to Germany’s Philipp Kohlschreiber 6-4, 6-4, so the title of all-time Indian Wells champion is Federer’s to gain outright in the desert.

He will next meet Brit Kyle Edmund for the first time.

The 22nd seed has won all four sets this week and captured the ATP Challenger Tour event in Indian Wells on March 3.