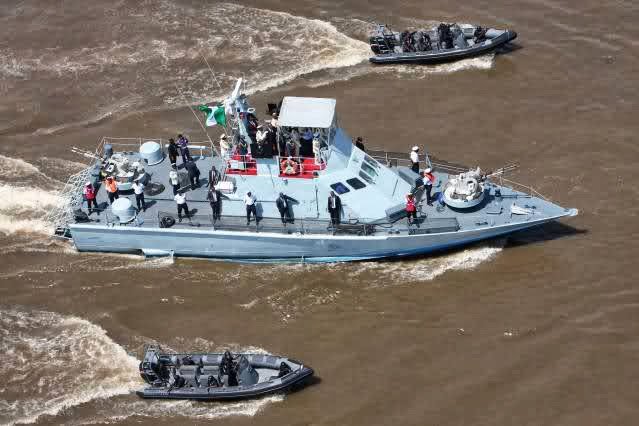 He said that Obangame involved navy authorities in the Gulf of Guinea, European and US Navy, adding that the aim of the exercise was to deepen cooperation amongst Gulf of Guinea navies.

Obangame Express is an annual multinational exercise supported by African, European and US partners.

Ngalabak said that the exercise was designed to improve cooperation and tactical expertise among participating nations in order to increase maritime safety and security for Gulf of Guinea nations.

“We have over 15 Nigerian warships participating in the exercise; we have eight ships actively participating that will go into the sea, while the rest would be placed on standby.

“Outside the training, the collaboration has helped to establish good platform for sharing information with our sister African nations,” he said.

According to him, the cooperation through Obangame Expressway has helped to reduce criminal activities on West African water highways.

“Today if there is any criminal activities going on in neighbouring countries, it will be easier for us to track it down and arrest it.

“Recently we even pursued vessels to the Beninois waters and the vessels were arrested. Now that the criminal knows that there is no hiding place, it is a bonus for all of us.

“Apart from information-sharing, look at human capacity building and also mutual trust. Before now, there is this apathy within Francophone, Anglophone, Portuguese and other nations.

“We don’t really interact among ourselves but with the Obangame Expressway, we now understand ourselves better so that mutual trust has been established.

“When we are doing something in Nigeria other countries fall in line. We get it done as a team; it is a very good thing to all of us,” he said

According to him, the other area Nigeria has benefited is synergy in operation. So, if we cannot get it in that area, we can easily ask other countries to do it. It is a good thing.

Ngalabak said that the exercise had been beneficial to the Nigerian Navy, especially in fighting ship piracy on the seas.

He said that officers and ratings of the Navy had been trained in modern maritime techniques, whose top in handy in the recent ship piracy attacks.

“The Nigerian Navy will be hosting this year’s exercise and has committed some of its capital ships and helicopters towards the exercise.”

Speaking on the exercise, the Commander, Military Sealift Command Europe and Africa, Capt. Eric Conzen said “the exercise has proven successful in past years in building capacity.

“I’m looking forward to working with our African partners to address maritime crime,” he added.