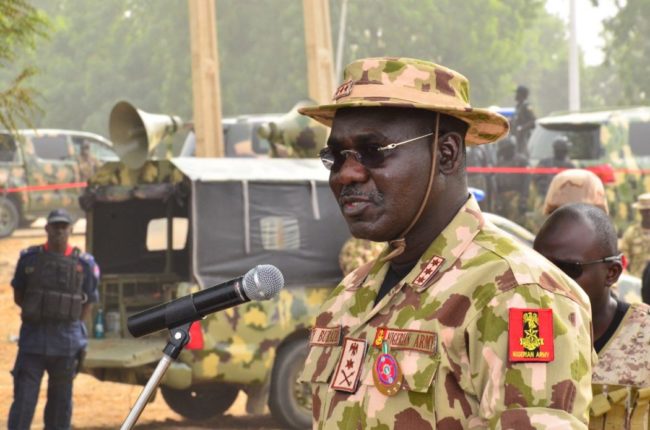 The Nigerian Army on Thursday promised adequate security in Nasarawa and neighbouring states.

The Chief of Army Staff, Lt.-Gen. Tukur Buratai gave the promise in Doma, after he inspected the 123 Special Forces Battalion barracks under construction in the town.

The News Agency of Nigeria (NAN) reports that when completed, the barracks will serve as the Headquarters of the Nigerian Army Special Forces Command.

Buratai said the command would help in checking the menace of cattle rustling, banditry, kidnapping, farmers/herdsmen clashes and other forms of criminality in the state and beyond.

Nasarawa, Benue, Taraba and Kaduna states were in the recent past bedeviled with herders/farmers clashes, prompting the army to conduct “Exercise Ayam Kpatuma” or Cat Race.

Earlier, the army chief paid condolence visit to the Emir of Keffi, Dr Shehu Yamusa, and later commiserated with the family of late Emir of Lafia, Alhaji Isa Mustapha, who died recently.

He also visited the Deputy Governor of the state, Mr Silas Agara and solicited for further assistance to complete the barracks.

Responding, Agara assured the army of the state government’s continued cooperation, noting that the army has contributed in stabilising the state and the country at large in terms of security.