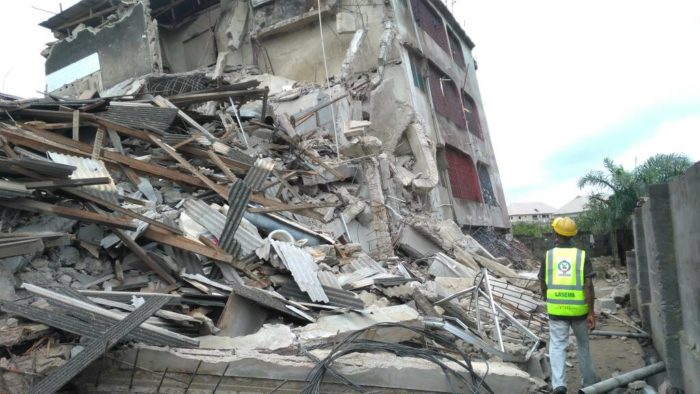 A property consultant, Mr Samuel Ukpong, has urged the Lagos State Government to empower NGOs in the control and monitoring of buildings, to avert recurrence of collapse.

Ukpong, a former Chairman, Nigeria Institution of Estate Surveyors and Valuers (NIESV) made the appeal on Friday in Lagos.

He recommended the Building Collapse Prevention Guild (BCPG) as the non-governmental organisation the government could recognise and empower to assist the Lagos State Building Control Agency (LASBCA) in the monitoring of buildings in the state.

The consultant spoke against the backdrop of Wednesday’s collapse of a three-storey building located at Massey Street, Ita-Faaji, Lagos Island, which left some school children dead, and with many others injured.

According to him, BCPG is a non-governmental organisation which comprises professionals from the seven professional bodies in the built environment.

He said the guild was in a better position to do comprehensive checks on the buildings because it had members in all parts of the state.

“As a professional body, the members have integrity of the profession to protect; they will carry out thorough checks on buildings and ask some relevant questions regarding the situation.

“The government agency may not be able to do detailed checks like the BCPG because sometimes they may overlook situations that will result to building collapse,” he said.

Contributing, Mr Chucks Omeife, former President, Nigeria Institute of Building (NIOB) said there was need for developers of collapsed buildings to be sanctioned to serve as deterrent to others.

Omeife said he was not aware of any developer that had been punished for the death of innocent people.

“The mistake of a doctor may only claim the life of one person, but when a building collapses, many lives and property worth billions of naira will be lost.

“Until a severe punishment is given to the developer, others will not refrain from rendering substandard jobs,’’ he said.