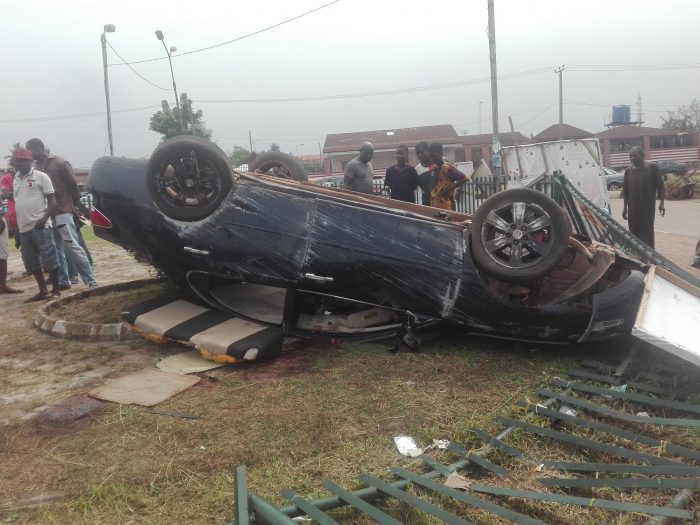 An unidentified 27-year old man has died in a fatal motor accident that occurred in Benin, Edo State, in the early hours of Saturday.

The accident involved a blue-coloured Lexus Saloon car with registration number BEN 862 PJ, and was said to have occurred at about 1.30 am, inside the round-about of the 5-Junction, along Uselu-Lagos Road.

The victims were said to be heading to Ugbowo area from the GRA where they allegedly went for a night party.

It was observed that the car which was coming from the TV road end, apparently on top speed, lost control at the round-about, somersaulted several times, before landing on its roof in the center of the roundabout.

The driver of the ill-fated car was said to have died on the spot, while four other occupants sustained varying degrees of injuries.

When our correspondent visited the scene of the crash, traffic police operatives were seen measuring the area.

Some of the sympathisers, who gathered round the accidented car were heard saying that the deceased was a ritualist who amassed so much money within a short time and built his house within six months.

The State Police Command spokesman, Chidi Nwabuzor, told our correspondent on phone that he would not be able to comment​ on the accident, but only on Monday.