Kaduna killing is being politicised - Buhari 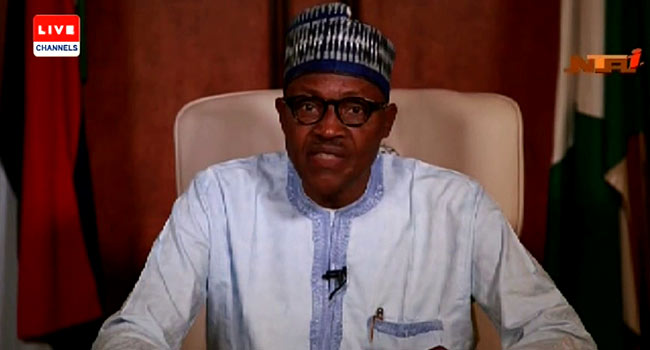 President Muhammadu Buhari says he is deeply troubled by persistent communal killings in Kaduna state, which has now been politicised.

The president made his feelings known when he reacted to the endless carnage in Kaduna state in a statement by by his Senior Special Assistant on Media and Publicity, Malam Garba Shehu, in Abuja on Saturday

President Buhari regretted that “everything is politicised in Nigeria, including the efforts to bring offenders to justice, because their people will rise up in arms to resist their arrests and prosecution’’.

He described hate, bigotry and prejudice as “deadly poisons that have infected the human psyche on such scale that people now don’t have any moral inhibitions about taking life.”

The president, therefore, urged the actors in the crisis to come to terms with the fact that mutual violence has no winners, but losers on both sides of the conflict.

He said: “I am deeply troubled by the fact that sanctity of life is now treated with such reckless disregard that people derive joy in shedding the blood of others or perceived enemies.

“Inhumanity has replaced compassion in the hearts and minds of the perpetrators of these atrocities.

“No responsible leader would go to bed happy to see his citizens savagely killing one another on account of ethnic and religious bigotry.’’

According to the president, violence cannot be the solution to these persistent conflicts as long as people resort to deliberate provocations, revenge and counter revenge.

He, therefore, maintained that, “while the government remains committed to protecting its citizens, the communities involved must also put their shoulder to the wheel in order to find a lasting solution.

“Lack of cooperation by those involved might frustrate government’s efforts towards finding a lasting solution, especially if those efforts are politicised.”

According to him, If the people resist government’s efforts to hold the perpetrators and their sponsors accountable, it would be very difficult to bring the violence to a permanent end.

The President also appealed to the warring communities to stop inhibiting the National Emergency Management Agency efforts to deliver food, medicines and temporary shelter to the victims of the violence who are in urgent need of assistance.

The Kaduna State Government had on Saturday confirmed the latest killing of nine persons by unknown gunmen, who attacked Nandu village in Sanga Local Government area of the state in the early hour of Saturday.

The attackers also burnt several houses in the village.