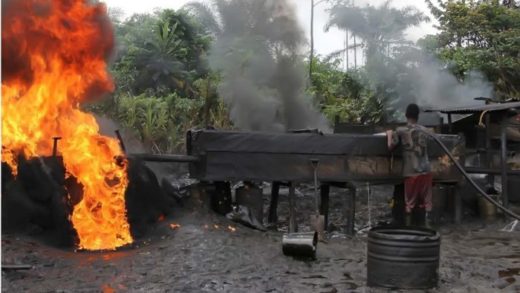 The Bayelsa Command of Nigeria Security and Civil Defence Corps (NSCDC) and Department of Petroleum Resources (DPR) in Bayelsa have joined forces against oil thieves and illegal refineries.

Commandant of the NSCDC in the state, Mr Ideba Pedro, disclosed on Saturday that the collaboration between his command and DPR was already yielding results.

Pedro spoke shortly after he led a team of NSCDC and officials of the DPR to seal off an unlicensed fuel station dispensing suspected illegally refined products in Agbura, a surburb in Yenagoa.

He said that the operation to seal the station was sequel to a tip off, and the command was aware of other filling stations that were dealing in illegally refined petroleum products and dispensing same to the unsuspecting public.

The commandant said that the NSCDC under his watch would not deviate from its core mandate, which is the protection of critical national assets and infrastructure and stamping out of oil theft and illegal refineries.

Also, Mr Ifi Obi, Team Leader of the DPR on the raid, assured that the agency would continue to collaborate with the NSCDC to ensure that such illegal filling stations are sealed.

Obi urged members of the public with useful information to contact the Yenagoa office of the DPR or the NSCDC and other security agencies to enable them avert the dangers posed by illegally refined products.

He explained that the samples of the illegally refined petroleum products collected from the filling station would be taken to the laboratory of DPR in Port Harcourt for analysis.

The team leader said that the results would be sent to the NSCDC for possible prosecution.