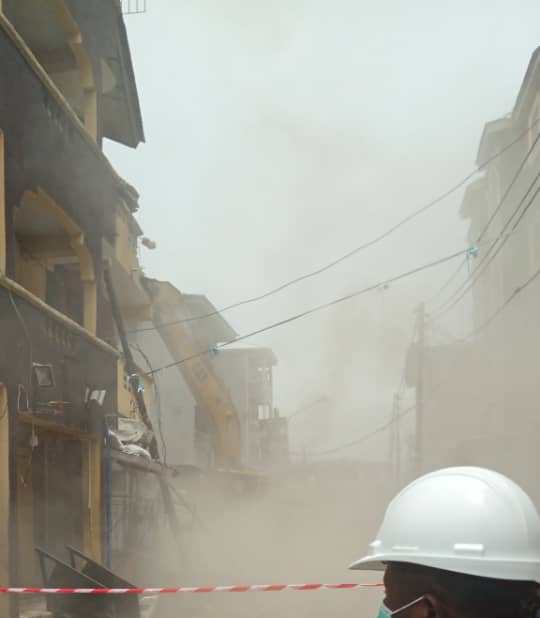 One of the buildings being demolished

The Lagos State Government intensified its demolition of distressed buildings on Lagos Island with 13 structures pulled down in the last three days.

Eighty distressed buildings have been earmarked for demolition by the State Government following last Wednesday’s collapse of a three-storey building at Ita Faji area of Lagos Island, with 20 people, majorly children killed.

The exercise was led by the Acting General Manager, LASBCA, Omotayo Fakoluju and the Permanent Secretary, Ministry of Physical Planning and Urban Development, Mrs Boladele Dapo-Thomas.

At Number 33 Ojo Giwa, a three-storey building was demolished by the officials in order to avert another collapsed building.

Speaking, Dapo-Thomas said that government would not rest on its oars until it sanitised the the whole of Lagos Island.

She added that government would ensure it sanitised and rid Lagos of distressed and dilapidated buildings in a bid to stem the era of building collapse in the state.

Also, Fakoluju said 150 distressed buildings had been identified on the Island, but 30 had already been demolished in the last one year while 80 would now be demolished.

Fakoluju added that the agency would carry out the demolition the 80 structures in phases.

The Acting GM, also disclosed that 20 of the 80 buildings earmarked for demolition were on Adeniji Adele, saying that the agency would no longer look back but ensure that distressed buildings were pulled down immediately.

He disclosed that lots of buildings on the Island had been marked for demolition, but that some of them were subject of litigation which prevented government from going ahead to pull them down immediately.

“Over 80 buildings are ready for removal but we shall be removing them in phases. In buildings which are subject of litigation, we try to evacuate the occupants from the buildings so that there will not be loss of lives,” he said.