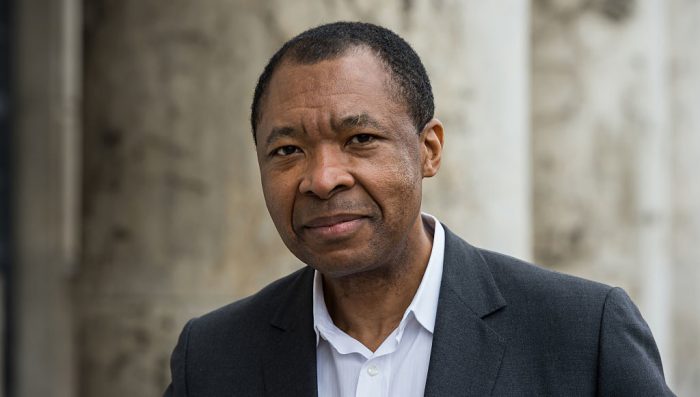 The Art world was thrown into mourning on March 15, 2019 when Nigerian curator, art critic, writer and poet, Okwui Enwezor died at the age of 55 after battling cancer for years.

Okwui Enwezor was also the artistic director at The Haus Der Kunst from 2011 to 2018.

On 23 October, 1963, Enwezor  was born as the youngest son of an affluent family of Igbos in Awkuzu in Nigeria. In 1982, after a semester at the University of Nigeria, Enwezor moved to the Bronx at the age of 18. In 1987, he earned a Bachelor of Arts degree in Political Sciences at the New Jersey City University.

When Enwezor graduated, he moved downtown and took up poetry. He performed at the Knitting Factory and the Nuyorican Poets Café in the East Village. Enwezor’s study of poetry led him through language-based art forms like Conceptual Art to art criticism. Teaming up in 1993 with fellow African critics, Chika Okeke-Agulu and Salah Hassan, he launched the triannual Nka Journal of Contemporary African Art from his Brooklyn apartment; “Nka” is an Igbo word that means art but also connotes to make, to create. He recruited scholars and artists such as Olu Oguibe and Carl Hancock Rux to edit the inaugural issue and write for it.

After putting on a couple of small museum shows, Enwezor had his breakthrough in 1996 as a curator of In/sight, an exhibit of 30 African photographers at the Guggenheim Museum. In/sight was one of the first shows anywhere to put contemporary art from Africa in the historical and political context of colonial withdrawal and the emergence of independent African states.

Enwezor was the director of the Haus der Kunst, Munich, Germany. He also had the roles of adjunct curator of the International Center of Photography in New York City, and Joanne Cassulo Fellow at the Whitney Museum of American Art, New York City.  In 2013, Enwezor was appointed curator of the Venice Biennale 2015, making him the first African-born curator in the exhibition’s 120-year history.]

Previously, Enwezor was the artistic director of the Documenta 11 in Germany (1998–2002), as the first non-European to hold the job. He also served as artistic director of the 2nd Johannesburg Biennale (1996–97), the Biennial Internacional de Arte Contemporaneo de Sevilla, in Seville, Spain (2006),[13] the 7th Gwangju Biennale in South Korea (2008), and the Triennale d’Art Contemporain of Paris at the Palais de Tokyo (2012). He also served as co-curator of the Echigo-Tsumari Sculpture Biennale in Japan; Cinco Continente: Biennale of Painting, Mexico City; and Stan Douglas: Le Detroit, Art Institute of Chicago.

He organized The Rise and Fall of Apartheid for the International Center for Photography, New York, in 2012 and “Meeting Points 6”, a multidisciplinary exhibition and programs “which took place in nine Middle East, North African and European cities, from Ramallah to Tangier to Berlin”, then at the Beirut Art Center in April 2011.

As a writer, critic, and editor, Enwezor was a regular contributor to numerous exhibition catalogues, anthologies, and journals. He was the founding editor and publisher of the critical art journal NKA: Journal of Contemporary African Art established in 1994, and currently published by Duke University Press.

In 2006, Enwezor received the Frank Jewett Mather Award for art criticism from the College Art Association. Enwezor was ranked 42 in ArtReview′s guide to the 100 most powerful figures in contemporary art: Power 100, 2010.

In June 2018 Enwezor signed a separation agreement with Munich Haus der Kunst partly because his battle with cancer took a more challenging turn.