Murder of PDP agent by FSARS: Wike to set up a Judicial Commission of Inquiry 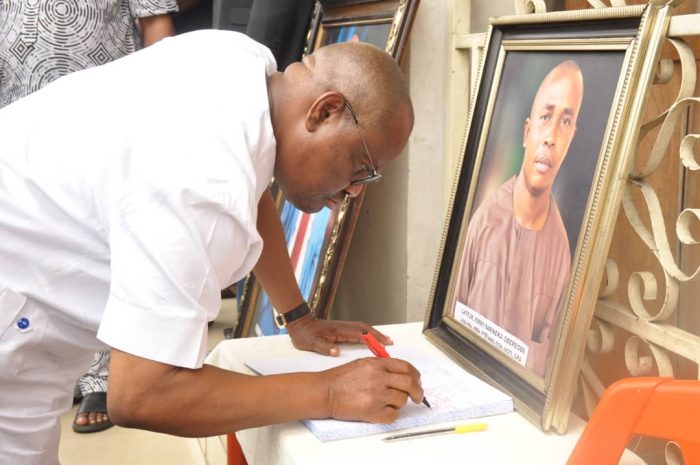 Rivers State Governor, Nyesom Ezenwo Wike signing the condolence register on Saturday at the home of Late Dr Ferry Gberegbe who was killed by F-SARs operatives at the Khana Collation Centre during the Governorship Election.

Rivers State Governor, Nyesom Wike has announced that the State Government will set up a Judicial Commission of Inquiry to ensure that the Federal Special Anti-Robbery Squad (F-SARS) personnel who killed Dr Ferry Gberegbe, PDP Khana collation agent are brought to justice.

“We will set up a Judicial Commission of Inquiry to ensure that the culprits are brought to Justice. It is unfortunate that F-SARs killed the PDP Collation Agent.

He spoke on Saturday in Port Harcourt when he led leaders of Rivers State on a condolence visit to the family of the slain lecturer .

The governor decried the shooting of the late lecturer by men of F-SARs led by Rivers F-SARs Commander, Akin Fakorede, at the Khana Collation Centre, where he served as the PDP Collation Agent. He said the fatal shots led to his death.

He said: “It is most unfortunate that the young man was shot dead by F-SARs led by Akin Fakorede in an attempt to cart away election results.

“Instead of us to allow people to choose who will represent and govern them, the security agencies will not allow that. Rather they prefer to kill us.

Governor Wike said the Late Dr Gberegbe remained committed to the PDP even on his sick-bed. He said the deceased sent him a text message saying that he would very happy when Governor Wike is declared winner of the election.