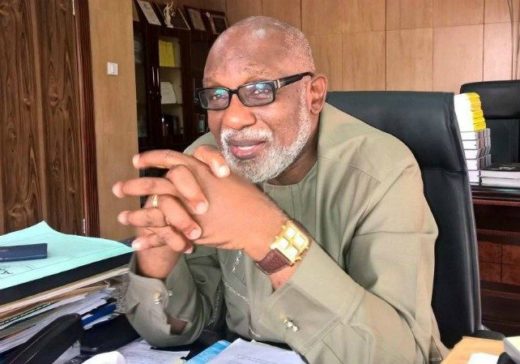 Gov. Oluwarotimi Akeredolu of Ondo State on Monday reiterated his commitment to ensuring that former militants in Ilaje and Ese-Odo Local Governments in the state were integrated into the Federal Government Amnesty Programme.

Akeredolu stated this during a “ thank you tour’’ to Ilaje, Ese-Odo, and Irele Local Government Areas of Ondo South Senatorial District.

The All Progressives Congress (APC) won 23 out of 26 seats in the March 9 State House of Assembly election.

The governor, however, appealed to the former militants to give the Federal Government time to ensure their inclusion in the programme.

He stated that the establishment of the LCDAs would bring the government closer to people at the grassroots.

Akeredolu told the gathering that a committee would soon be set up to actualise the plan.

He also commended the people for voting massively for APC candidates in the House of Assembly election.

Earlier, Oba Sunday Amuseghan, the Kalasuwe of Apoi, and Omolewa Ojo, Chairman, Ese-Odo Local Government, had thanked the governor for the construction of Sabome township road and renovation of Igbekebo General Hospital among other initiatives in the area.

Also speaking, Oba Thomas Adesayo, the Ahaba of Ajagba, and Mr Gbadebo Odimayo, Chairman, Irele Local Government, had commended the governor for the various projects carried out in the area.

Similarly, Ade Adetimehin, the Chairman of the APC in Ondo State, enjoined the people of the area to continue to support the APC-led government.