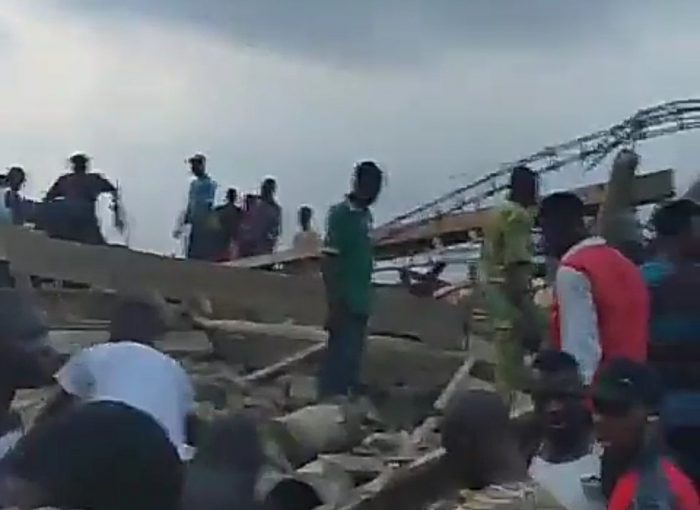 Site of the collapsed building in Ibadan

Oyo State Government has summoned the site engineer in charge of ongoing construction project at the collapsed building in Ibadan.

Alhaji Waheed Gbadamosi, the Director-General, Oyo State Bureau of Physical Planning and Development Control disclosed this to journalists in Ibadan on Monday.

The two-storey building under construction at Sogoye area of Idi-Arere in Ibadan had collapsed on Friday, March 15.

No death was recorded from the incident, but some site workers who sustained various degree of injuries are presently hospitalised on the bills of the state government.

Gbadamosi said that the site engineer was summoned to explain what led to the collapse of the building.

“Preliminary reports on the possible cause of the disaster revealed that standard materials were used for the construction.

“But we have found out that they did not allow the curing period to lapse before they continued with the construction.

“When you do your decking, you must allow it to cure for 21 days before you start to put blocks on it. They didn’t allow that three weeks to lapse.

“I think they were in hurry to complete the building. I am sure, by the time they were putting more loads on it, definitely it will come down,” he said.

He stressed that the site engineer was not professional enough to advise his client to allow compliance with due process.

According to him, “It is like you are putting too much loads on your head, your neck will just crack and you will go down. So, that was what happened.”

Gbadamosi said that the site engineer would be reported to his professional body, Council for the Regulation of Engineering in Nigeria (COREN), if he failed to honour the invitation.

“If he fails to honour the invitation, we will report him to his professional body. By the time we report him to COREN, the body may deregister him,” he said.

He said government had always ensured that developers come with their own engineers, adding that such engineers would sign undertaken with government.

Gbadamosi said the undertaken would bear COREN’s stamp to undertake the supervision of any structure from foundation till completion.

“We have introduced a new system which directs that you return to us when you complete your building. We will come and examine whether you are worthy of being given a certificate of completion.

“You will pay a token, like N25,000 to get the certificate. If you are not given the certificate, it means the building is not worthy of being inhabited by any individual, not even goats,” he said.