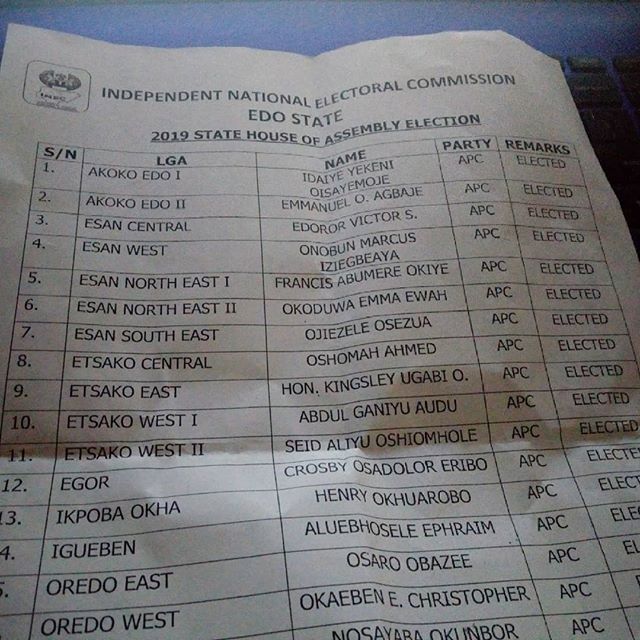 State house results given to news men by INEC

No fewer than 10 petitions have been filed before the National Assembly Election Petition Tribunal sitting in Enugu, investigation reveals.

A check at the tribunal’s secretariat in Enugu revealed that the petitions arising from the outcome of the Feb. 23 National Assembly elections were challenging three senatorial results and seven House of Representatives results.

Further breakdown of the petitions reveal that out of the 10 petitions, nine were filed by candidates of the All Progressives Congress (APC) while one was filed by a candidate of African People’s Alliance (APA).

In her petition, Mrs Juliet Ibekaku-Nwagwu of the APC is challenging the re-election of Sen. Ike Ekweremadu for Enugu West Senatorial Zone.

According to the information made available, APC’s Mr Eugene Odo is also challenging Sen. Chuka Utazi who was declared winner for Enugu North Senatorial Zone.

Still at the senatorial level, another APC candidate, Mr Lawrence Eze filed a petition challenging the declaration of former governor of the state, Dr. Chimaroke Nnamani as winner of Enugu East Senatorial zone.

The Federal House of Representatives seats being challenged are those of Enugu North and South, Ezeagu/Udi, Nsukka/ Igboeze South and Aninri/Awgu/Oji River.

The 21 days required by law for the filing of petitions arising from elections had lapsed.