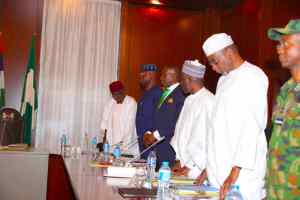 President Muhammadu Buhari is currently holding a closed door meeting with Service chiefs at the Presidential Villa in Abuja.

The meeting is likely to dwell on the security situation in the country and how to ensure maximum security in states where the Independent National Electoral Commission (INEC) is conducting rerun election on Saturday March 23, TVC reports.

Meeting still in progress as at the time of filing this report.