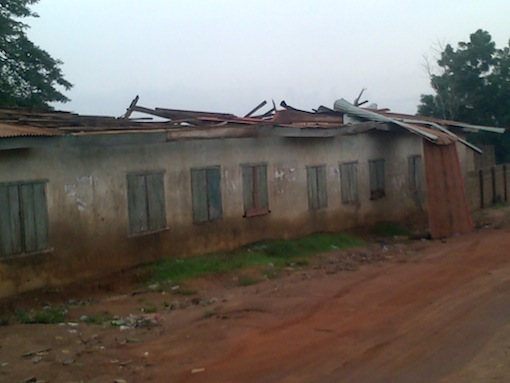 No fewer than 46 houses and a monarch’s palace were destroyed by a rainstorm in Are Ekiti, a town in Ifelodun/Irepodun Local Government Area of Ekiti.

The incident, which followed three days of downpour, has thrown the community into a state of apprehension as many victims have been displaced.

The Alare of Are Ekiti, Oba Boluade Adebiyi, who confirmed the incident on Wednesday, said that the property of his subjects, including a section of the palace, were affected.

He appealed to both the state and the Federal Governments to come to the aid of the community.

”As you can see, part of the palace roof has been blown off, but that is not my immediate problem now.

“My concern now is how to take care of my people that have become homeless by this disaster.

“Immediately after the rainstorm, I sent some of my chiefs to inform the state government.

“I also contacted the officials of the National Emergency Management Agency and I spoke with their quick response team,’’ he said.

One of the victims of the rainstorm, Mr Ayodele Anisulowo, lamented that the roof of his family house was blown off while members of the family had been rendered homeless.

Another victim and octogenarian, Mrs Jibiye Adeleye, said she had been forced to relocate to her father’s house pending the time her children would repair the house.

”I thank God that I am a native of Are Ekiti, I have a place to keep my head for now. But it is not convenient at all.

“I have been married for almost 60 years and since I left for my husband’s house, I have not slept a night here in my father’s house,’’ the victim, who is also a widow, said.

He said Are Ekiti was not the only community affected by the rainstorm .

According to him, Ado Ekiti, the state capital, and some other communities such as Afao and Igbemo were equally affected.

“The State Emergency Management Agency and NEMA have jointly visited some of the affected areas for an on the spot assessment of the damage,’’ he said.

He also said more than 30 houses were destroyed in each of Isan and Iludun while 40 roofs were blown off in former Gov. Ayo Fayose’s hometown of Afao Ekiti.

”Among the properties destroyed in Afao was the newly completed Gifted Academy, a government owned institution for gifted children in the town

”We have visited some of the affected communities to assess the level damage. We have been able to establish that more than 70 houses were affected

”We thank God that no casualty was recorded, but we are still compiling our report and when it is ready, we shall state the total number of the victims,’’ he said.