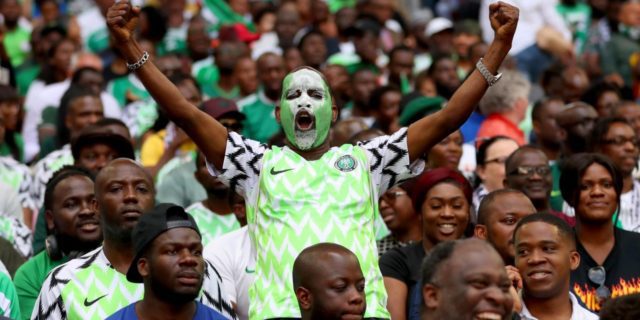 Goals from Odion Ighalo, Henry Onyekuru and the substitute Simeon Moses was all the Eagles used to beat Seychelles at the Samson Siasia Stadium in Delta State.

Some of the enthusiasts who spoke to the News Agency of Nigeria (NAN) after the match said that Seychelles really meant to shock Nigeria in the match but said that the visitors were below in strength.

”This is not a match for them to be so serious about; Eagles have qualified already but they have to win for pride.

”It is nice to seal the top spots but we have to build two strong teams for the AFCON proper,” he said.

Also speaking, Ignatius Okpara, a sports analyst expressed delight over Super Eagles victory but noted that Nigeria did not have a reliable goalkeeper.

”Francis Uzoho has been committing errors and we need to give other goalkeepers chance to see how they will perform,” he said.

Also, the coordinator of Enugu State Grassroots Boxing Talent Hunt, Ikechukwu Okoronkwo, said that what mattered most was victory and qualification.

”Nigeria won the match and thereby qualified without mathematical calculation as they top the group,” he said.

He said that the best leg needed to be assembled in the friendly matches leading to the AFCON tournament and that the technical team should learn to keep teams together for long period.

”We have under 17, 20 and 23 squad which we should graduate together and expose them to the Super Eagles level,” Okoronkwo said.

Another enthusiast, Austin Ezenwata who runs a football show room in Abakpa Nike, Enugu said that the Eagles needed a good goalkeeper.

‘‘The entire department did well but we were let down by the back line and the goalkeeper,” he said.

He was of the opinion that Ikechukwu Ezenwa should be trusted to mind the post for the eagles in matches so as to glue with the entire team.

He had proved his quality in big matches and there were other good goalkeepers in Nigeria Professional Football League (NPFL).

NAN reports that Nigeria topped the group with 13 points from six matches while South Africa occupied the second position with nine points with a match to play.

Meanwhile, Libya was at the third position with seven points with a match to play as Seychelles occupied the last position with a point to show for after six matches.