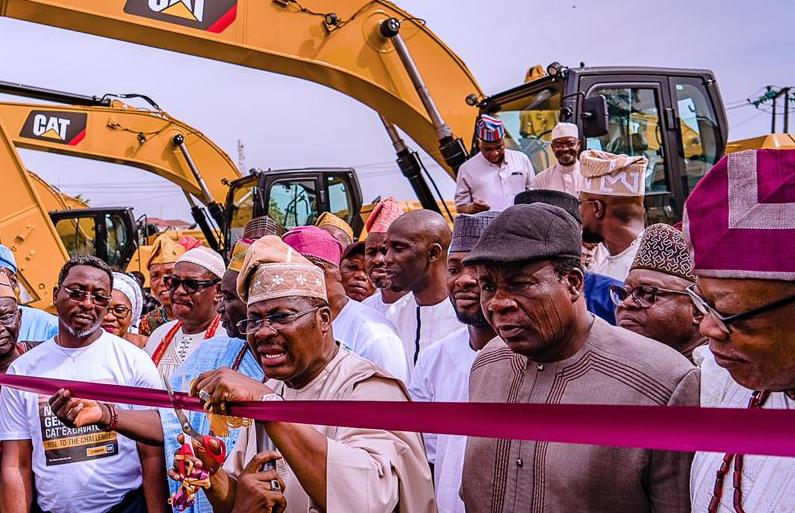 Governor Abiola Ajimobi of Oyo State has inaugurated 33 excavators purchased by the government to boost agricultural production, safety and rescue operations, as well as urban renewal across the 33 Local Government Areas and 35 Local Council Development Areas.

At a brief ceremony held within the Governor’s Office, on Friday, Ajimobi said that the purchase of the equipment was to further reinforce his earlier stance that he would sustain the administration’s developmental strides until May 28 when his tenure would end.

The governor explained that it was one of the excavators that was deployed for rescue operations during the recent building collapse in Molete Area of Ibadan, which made it possible to bring out all those trapped in the rubble alive.

The 33 excavators are fresh additions to the first batch of the earth-moving equipment procured by the Ajimobi’s administration, with 320 tractors and 30 mini trucks distributed to 20 agrarian Local Government Areas in 2012.

Ajimobi described his administration’s investment in agriculture, including the purchase of the excavators, as another unprecedented feat in the history of the state.

The governor said, “I make bold to say that this is the first administration in the history of this state that will invest so heavily in the agricultural sector. The 33 excavators we are inaugurating today is another unprecedented feat. The excavators will be used by the 33 Local Governments and the 35 Local Council Development Areas, LCDAs, in the state for agricultural purposes, urban renewal and other environmental intervention purposes. History will be kind to us as a government that came on board to reposition the agricultural sector to boost the value chain. Our administration has recorded many firsts in the last eight years, which will take a long time to surpass. We are proud of our achievements, especially in the restoration of peace and security, urban renewal, massive construction of quality roads across the state, among others. I want to say it unequivocally that we will work hard until May 28 when our tenure will end”.

He continued, “This is why I want to urge all of you that have been part of our success story to walk tall anywhere you go. That God made it possible for us to spend eight unprecedented years is not a mean feat. You have no reason to be downcast because we lost election. Be of good cheers and be thankful to God. When the history of this state is being written I want to be remembered as a forthright, down-to-earth governor who does not suffer fools gladly. I want to be remembered as a governor who will call a spade by its name no matter what. These are virtues I’m not prepared to trade for anything”.

The governor called on the civil servants and traditional rulers in the state to cooperate with and support the incoming administration in the same way they did for his administration, in the larger interest of the state.

Ajimobi said its only when everybody was on the same page that the developmental strides of his administration could be sustained by his successor, whom he said would also be held accountable to his electioneering promises.

In a remark, the Public Sector Manager of Mantrac, the supplier of the excavators, Mr Alex Nwoko, said that the state government had taken a bold step by procuring the largest number of excavators by any state government for the use of its LGAs.

He said that the gesture was the highest singular investment by any state government in the country for the purpose of construction, safety and rescue efforts, as well as the agricultural production.

Nwoko said, “This is the singular highest investment in construction, safety efforts and for agricultural sector by a state government. The company’s policy and the agreement we entered into with Oyo State government will see to the training of operators and a standing warranty for the products”.