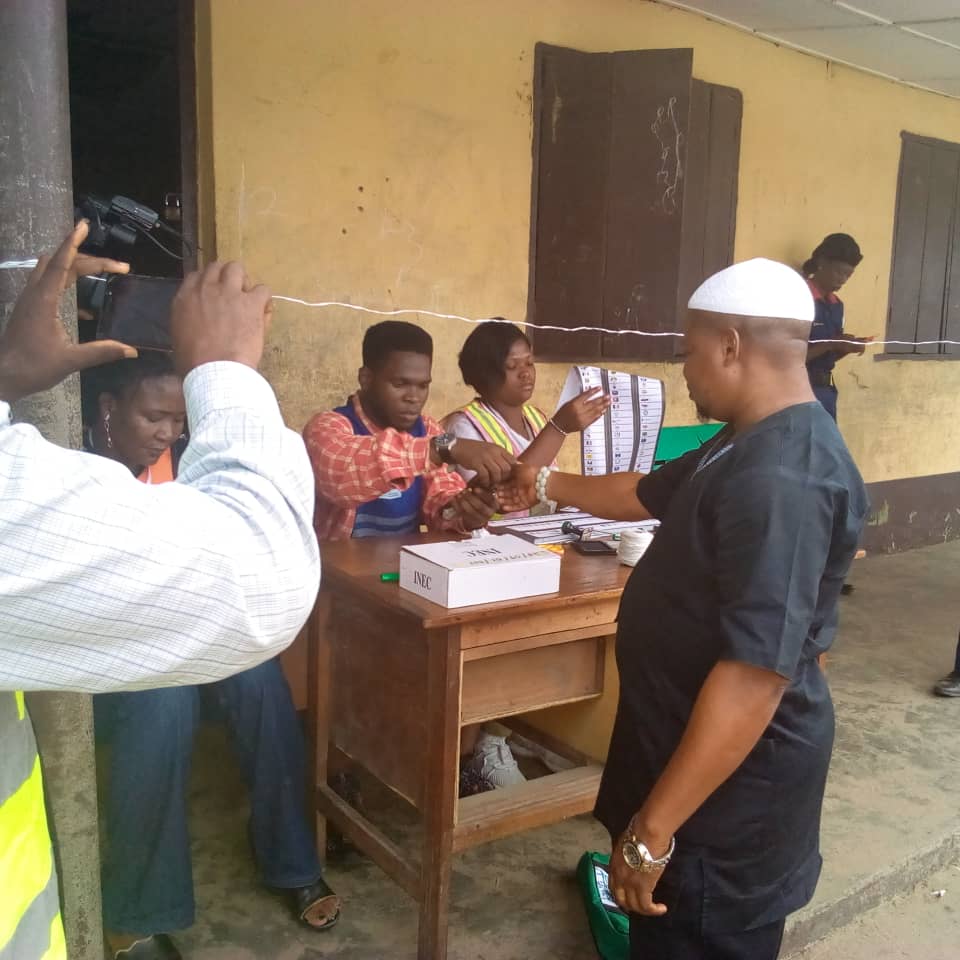 FILE PHOTO: Baale Erinle Kazeem of Okegun Odofin in Ibeju-Lekki casting his vote at Polling Unit 001 in ward 01 of Ibeju-Lekki during the supplementary election at the area on Saturday. (NAN)

Voters came out in trickles at Ibeju-Lekki state constituency 1, where supplementary elections held in Lagos State on Saturday.

Officials of the Independent National Electoral Commission (INEC) and materials arrived the polling units before 8:0am and the units were open at 8:00 am.

The voter turnout was however low as INEC officials on ground were seen waiting for voters to come out to vote.

Baale Erinle Kazeem of Okegun Odofin in Ibeju-Lekki said he was sure that the supplementary election would be peaceful.

The traditional ruler, who cast his vote at about 10:00 am at polling until 001 of Ward 01, however, said that the notice for the supplementary election was short.

He said that many of the youths and residents of the area had left for the Lagos metropolis for different engagements.

Mrs Fatimon Ashafa, APC agent at PU 001 said: “We were not aware of this supplementary election until Thursday and we went out to inform our people, though the notice was too late.

The PDP agent, Mr Suru Fashinu at same unit said that the supplementary election had never happened in the area and most residents were not aware of it.

Fashinu, who adjudged the election to be free and fair, expressed concern over the low voter turnout.

Mrs Gbemisola Omoshola, the PDP agent at PU 006 at the junction of Ajewole said that the election had been smooth without any problem.

Omoshola said, “I am satisfied with the process but people are not coming out because it is a supplementary election.”

Prince Adeshina Anisere, the APC agent at the same unit said: “Everything is going on peacefully, we are together and one with other parties. No fight and argument.”

Mr Omoku Ijaodola, PDP agent at PU 004 located in the premises of customary court, Ibeju-Lekki said that the election had been free and fair since it started at 8:00 am, while his counterpart Mr Akinlabi Akinkunmi in PU005 affirmed same.

Mr Saheed Ijaodola, APC agent at 005, said: “People are coming to exercise their franchise, we are happy with the peaceful conduct.”

INEC is conducting a supplementary election in nine polling units of Ibeju-Lekki state constituency I for the Lagos State House of Assembly seat.

The commission had declared the March 9 house of assembly election in the constituency inconclusive because of over-voting in the nine polling units covering two Registration Areas (Ward) of the constituency.