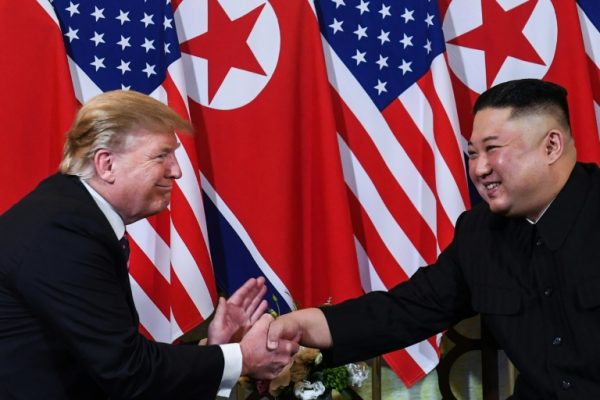 Trump and Kim meeting at the DMZ today

U.S. President Donald Trump on Friday said he has decided against imposing new large-scale sanctions on North Korea in a confusing tweet that seemed to imply he was reversing measures against two Chinese shipping companies, a U.S. administration source familiar with the matter said.

The confusion began when Trump said on Twitter that he had “ordered the withdrawal” of “additional large-scale sanctions” on North Korea that had been “announced today by the U.S. Treasury.”

But there were no new U.S. sanctions on North Korea announced on Friday, leading news organisations, lawmakers and experts to believe Trump was referring to the Treasury’s blacklisting on Thursday of two Chinese shipping companies that it said helped North Korea evade sanctions over its nuclear weapons program.

The sanctions on Thursday were the first since his second summit with North Korean leader Kim Jong Un in Hanoi last month, which collapsed over conflicting demands by Pyongyang for sanctions relief and by Washington for North Korea to give up its nuclear weapons.

The Trump administration did not respond to queries to explain what Trump meant in his tweet for more than five hours.

But she did not specify which sanctions Trump spoke of.

The administration source, speaking on condition of anonymity, said Trump’s tweet had nothing to do with the Thursday sanctions, but rather was meant to refer to a decision to not go forward with additional large-scale sanctions on North Korea at this time.

There has been no sign of direct contact between Washington and Pyongyang since the collapse of the Feb. 27-28 summit, though Trump has stressed his good personal relationship with Kim and his administration has said repeatedly it is willing to re-engage.

North Korea has warned it is considering suspending talks and may rethink a freeze on missile and nuclear tests, in place since 2017, unless Washington makes concessions. Hours after Thursday’s sanctions announcement, North Korea on Friday pulled out of a liaison office with South Korea, a major setback for Seoul, which has pushed hard for engagement between Washington and Pyongyang.

U.S. Secretary of State Mike Pompeo said on March 4 he was hopeful he could send a team to North Korea “in the next couple of weeks,” but there has been no sign of a North Korean willingness to extend such an invitation.