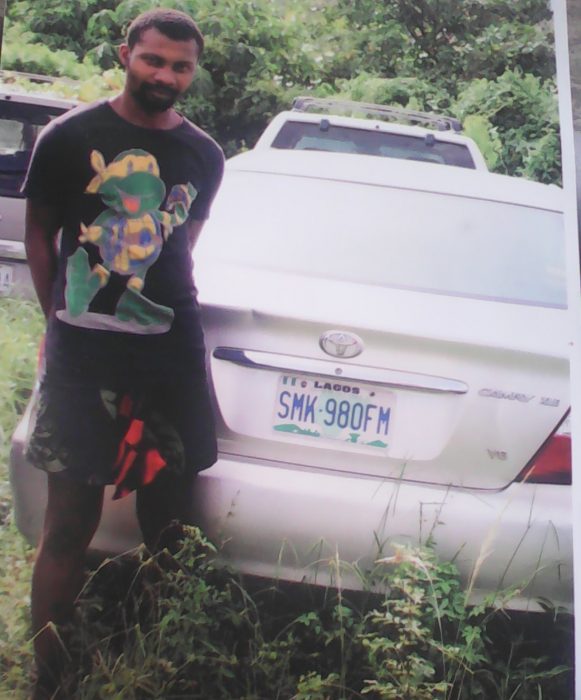 Operatives of the Federal Special Anti-Robbery Squad, FSARS at Adeniji Adele, Lagos Island, Lagos have arrested a robbery suspect who allegedly connived with his accomplice now at large, to rob a driver with Taxify Car Hiring Services in Lagos of his Camry and allegedly strangled him to death.

Police alleged that the suspect, Ikechukwu Ozorumba, 29, a resident of 16 Yaro Street, Okokomaiko, Lagos from Obolo Uku, Delta State allegedly conspired with his friend simply called Nkelechi, aka ‘Sun Shine’ to rob the driver, Ebenezer Olotu from Akoko in Ondo State of his Camry with registration number SMK 980 FM at Okokomaiko area of Lagos and killed him and drove the car to Imo State to look for a buyer.

Also arrested with the suspect was one Chima Chukwuemeka, 38, a palm oil farmer in Oguta area of Imo State for allegedly harbouring the robbery suspect in his farm to evade police arrest.

Police alleged that nemesis caught up with the robbery suspect when the family of the late driver petitioned the Deputy Commissioner of Police, DCP in charge of FSARS, Lagos Island, Mr Kola Kamaldeen that their breadwinner who worked with Taxify Car Hiring Services in Lagos left home for work on 26 December, 2018 and had yet to return home.

Following the report, Kamaldeen directed his team led by SP Olaniyi Festus to do everything to locate the missing driver.

A Police source alleged that after days of intelligence gathering in Lagos metropolis, the police team, following a tip-off found the corpse of the late driver dumped at Jimoh Street, Okokomaiko, Ojo, Lagos.

The Police evacuated the corpse and deposited it at the mortuary.

The robbery suspect led the police to recover the stolen car at a hideout in Imo State. The two suspects were taken to Lagos with the car.

During investigation, according to the Police, the robbery suspect allegedly confessed to the crime and said that he and his accomplice, Nkelechi now on the run did not intend to kill the driver, but just to rob him of his car and that the driver’s stubbornness led to his death.

In his alleged confession to the Police, Ikechukwu allegedly stated: “On 26 December,2018, we chartered the driver as passengers in Surulere area of Lagos and told him to take us to Okolomaiko area of Lagos and on our way, we ordered the driver to surrender his car key to us, but he refused and started struggling with us and in the process, we strangled him to death and dumped his body at Jimoh Street, Okokomaiko and drove the car straight to Imo State to look for a buyer for it.”

In his own alleged narrations, Chukwuemeka allegedly stated: “If I had known that Ikechukwu robbed a driver of his car and killed him, I would not have harboured him in my farm till the Police came to Imo State from Lagos to arrest me of what I knew nothing about.”

A Police source said that the suspects would be charged to court after completion of investigations.