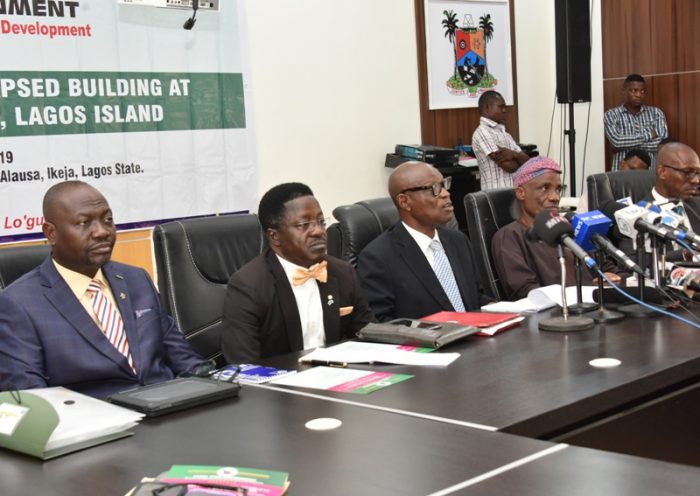 Top government officials and others at the event.

Stakeholders on Tuesday called for thee involvement of professionals in the built industry in order to stem rising cases of collapsed buildings in Lagos State.

They spoke at They spoke at one-day public hearing on the collapsed building at 63 Massey Street, Ita-Faaji, Lagos Island, organised by Ministry of Physical Planning and Urban Development, which took place at the Bagauda Kaltho Press Centre in Alausa, Ikeja area of Lagos, Southwest Nigeria.

The stakeholders further called for strict application of building regulations by the state government and prosecution of developers, owners and builders who failed to adhere to the regulations as required by law.

According to them, most of the cases of collapsed building were as a result of activities of quacks handling building constructions in the state, while calling for synergy between all the professionals in the industry and the relevant government agencies as well as owners or developers to ensure that the right things were done before, during and  after building to end the menace of collapsed buildings.

Mr. George Akinola of the Building Collapse Prevention Guild (BCPG), in his presentation identified among others: lack of comprehensive sub-soil investigation before designs were done; Non-adherence to designs and professional advice during construction; lack of effectiveness of government agencies charged with the monitoring of the building procurement and production process; quackery at both pre- & post-contract stages; use of substandard materials; poor workmanship; professional incompetence; lack of Maintenance; greed by developers and contractors, as some factors responsible for building collapse.

Proffering solution, he called for the involvement of architects, civil, structural, mechanical and electrical engineers, Quantity Surveyors, Builders and Land Surveyors in all building construction work in the state.

He, however, called for a law to empower LABSCA to demolish marked buildings within five months instead of leaving it for the owners who might not be willing to bring down the structure until it collapsed and kill people.

Speaking on behalf of Lagos Anti-demolition Movement, Ayo Ademiluyi, Co-convener, called for among other things Coroner’s Inquest into the Ita-Faaji collapse to determine the number of the dead and injured; prosecution of government officials who were found negligent in their duty as regards timely demolition of the building; investigation into the quality of building materials by developers and prosecution of the developer.

He also called for application of urban renewal strategies to the crisis of dilapidated and decrepit buildings on Lagos Island as well as compensation for the families of the deceased and wounded pupils.

Chairman of the occasion, Engr. Wasiu Olokunola, who is chairman of the Ad-hoc Committee on the Ita-Faaji building collapse told stakeholders that the committee would look into their submissions and report of all previous committees on building collapse in the state and come up with a recommendation to the government to tackle the menace so as to save lives and property.

Olokunola had earlier noted that the event was an avenue to exchange ideas with stakeholders in the built profession and to fashion ways forward in ensuring that the people engage professionals in building.