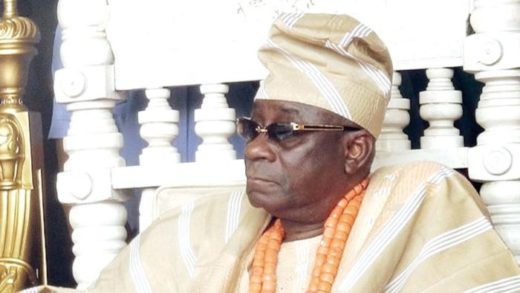 Justice Babajide Candide-Johnsono of the Lagos State High Court made the declaration while delivering judgment in a suit filed by two members of the Lagos Royal Family, Prince Adedoyin Adebiyi and Prince Rasheed Modile, challenging Akiolu’s installation as the Oba of Lagos.

The judge dismissed the suit after including that the two plaintiffs failed to prove their case against the Oba.

According to the judge, both their oral and documentary evidence were full of inconsistency, adding that the onus lied on who alleged a breach to prove their case beyond reasonable doubt.

“Reviewing the totality of evidence before the court, the nomination of the third defendant was done in accordance with the law. The evidence of claimants cannot stand the test. Claimant failed to place before the court evidence to substantiate their claims,” he said.

The judge also held that the the court lacked the jurisdiction to upturn long established custom of over 200 years for the enthronement of the Oba of Lagos.

He maintained that what the claimants had attempted to do with the suit was a burning desire to overturn succession disaster of over 239 years.

“The ruling house of Ologun Kutere has produced the Oba of Lagos in the past 223 years. Where a statute has given jurisdiction to tribunal, the High Court shall only assume a supervisory role. It is the Customary Court which has the authority to entertain and determine customary matter,” he said.

The claimants had instituted the suit in 2003 against the state governor, the Attorney-General of Lagos State, Babatunde Akitoye and Junaid Eko.

Adebiyi and Modile were claiming that Akiolu was not entitled to the throne because he is not a member of a ruling royal family by not being a direct descendant of Oba Ado, the first Oba of Lagos.

They held that only members of the Ologun Kutere and Akinsemoyin ruling households were entitled to the throne.

The claimants also alleged that proper customary rules and procedures were not followed when he was appointed as Oba in May 2003.