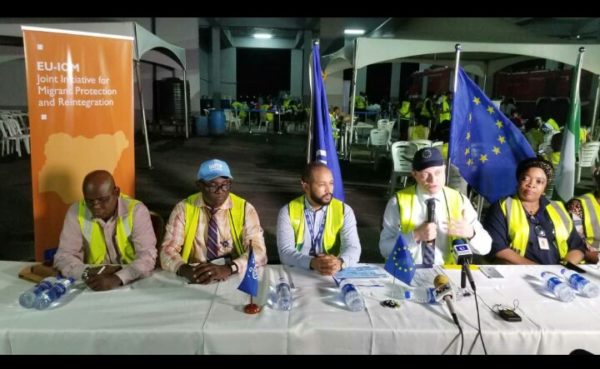 The agency said the returnees were assisted back from the volatile North African country by the European Union (EU) and International Organisation for Migration (IOM) Voluntary Assisted Returnees Programme which began in April 2017.

The Coordinator, NEMA Lagos Territorial Office, Alhaji Idris Muhammed, made this known while receiving a fresh batch of 132 Nigerians from Libya on Tuesday night.

The Nigerians arrived the Cargo Wing of Murtala Muhammed International Airport, Lagos aboard a chartered Buraq Air aircraft with registration number 5A-DMG at about 7.30p.m.

They arrived barely 24 hours after another batch of 180 of their compatriots returned to Nigeria from the same country.

According to him, the returnees came back from four major cities in Libya – Alkrarim , Misursta, Benghazi and Ghanfoda, where they had been stranded en route Europe via the Mediterranean Sea.

Muhammed thanked IOM and EU for facilitating the return of the Nigerians and assured them that the Federal Government was ready to work with development partners to create a conducive environment for young Nigerians.

He noted that this would help to curb the scourge of irregular migrations and the desperation of young people to fend for themselves.

Muhammed said the support and cooperation towards the programme by all levels of government in the country showed that all hands were on desk to find a lasting solution to the issue.

Also speaking, the EU Ambassador to Nigeria, Mr Ketil Karlsen , who witnessed the 65th flight since the programme started, said migration should be aspiration but not desperation.

Karlsen said: ”Migration, mobility and curiosity to know new places are as old as human kind itself and are natural.

“What is not natural is the kind of irregular migrations that leads to wrong purposes and put people’s lives at risk.”

The ambassador commended all the national and international partners who had been participating in the success story of the exercise.

He lauded the excellent tasks of IOM in the process of identifying, locating, mobilising and convincing the stranded Nigerians to voluntarily return home.

Karlsen further praised the UN Migration Agency for initiating the reintegration attractions like the start-up capitals, vocational training and psychological services that had added value to the returnees.

The envoy, however, observed that the root causes of irregular migrations must be addressed.