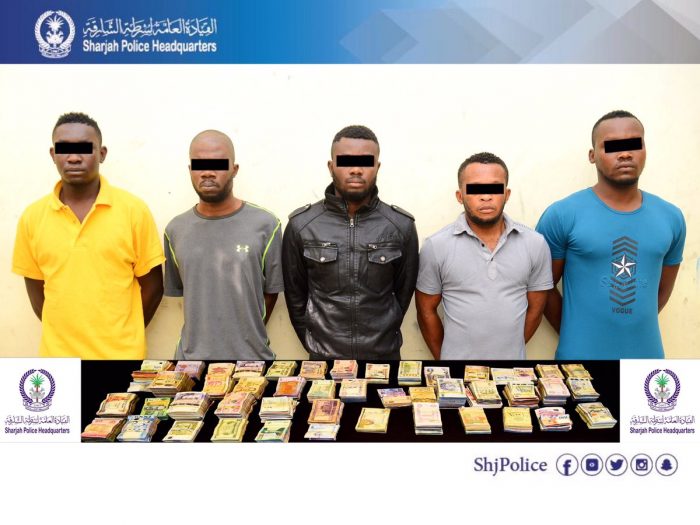 The identities of five Nigerian suspected armed robbers who were arrested in the United Arab Emirate, UAE, for robbing a Bureau De Change of the sum of N226.2 million (Dh2.3 million), have been revealed.

The Nigerians were alleged to have stormed a Bureau De Change in Sharjah and carted away Dh2.3 million.

According to Sharjah police, the suspected Nigerian robbers had been arrested.

Two employees at the BDC were said to be injured during the operation by the suspects who entered UAE on visit visas, on March 18.

Major General Saif AlZari Al-Shamsi, Commander-in-Chief of Sharjah Police, on Instagram stressed that Sharjah Police would continue its efforts to eliminate all negative phenomena and reduce theft crimes committed by violators of entry and residency laws.

Al-Shamsi revealed that Sharjah police managed to identify and arrest the five members gang from African nationality, after they broke into Al Ansari Exchange, and seized on more than AED 2 million.

However, the Senior Special Assistant to the President on Foreign Affairs and Diaspora, Abike Dabiri-Erewa, had condemned the act of five Nigerians arrested for the alleged robbery of Dh 2.3m in Sharjah Area of Dubai, UAE.

A statement by the Special Assistant Media to the SSA, Abdur-Rahman Balogun, said the action of the five Nigerians is condemnable.

She described the action of the Nigerians in a foreign land as despicable and shameful as it was not in accordance with good character of Nigerians.

Dabiri-Erewa also advised embassies to screen applicants for visa and ensure that they were of good character.
Tags:   Bureau De Change   Nigerians   UAE