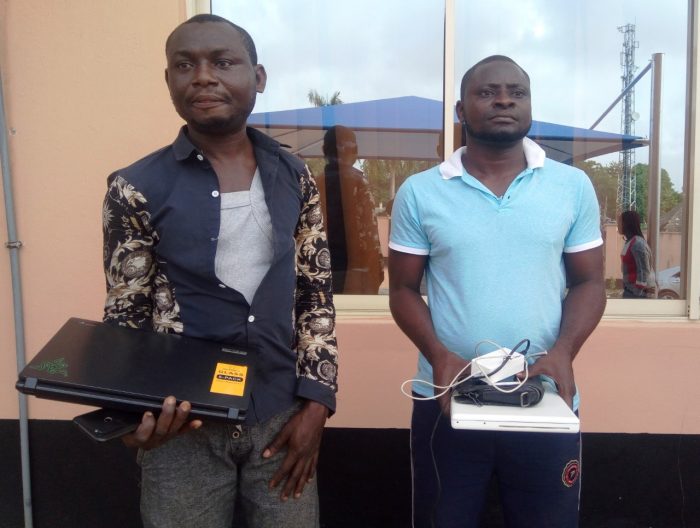 The suspects who wanted to use the woman for ritual

A woman has jumped from a two-storey building in Ibadan, Oyo State to escape from ‘Yahoo Boys’ who wanted to use her for ritual.

The Oyo State’s special security outfit, Operation Burst, arrested the two suspected internet fraudsters to the Ibadan zonal office of the Economic and Financial Crimes Commission, EFCC, after the woman escaped being used as a ritualist.

The suspects, Sanusi Azeez Toba and Osho Olalekun Micheal, were arrested on April 3, 2019 at Kolapo Ishola, Akobo area of Ibadan after one of their victims escaped by jumping down the two-storey building where she and others were taken hostage.

According to the female victim, “We met at the club last night and we all went back to their apartment to sleep over. At some point, I noticed some funny movement and I saw them with a calabash (a native pot).

“That was when I knew they were ritualists with the intention to use me for rituals. So, I jumped off the two-storey building, and off the fence. I then reported the case to the ‘Operation Burst’.

Preliminary investigations have also revealed that the suspects have various incriminating documents stored in the Laptops and phones recovered from them at the point of arrest.