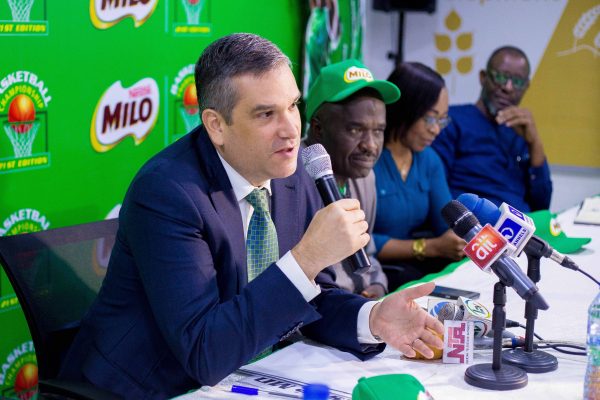 Olufemi Akintola, the Category Manager, Beverages, Nestle Nigeria PLC, on Friday said that the company would remain committed to the development of youths through basketball.

He added that no fewer than 1.5 million youths had participated in the Nestle Milo Basketball Secondary School championships between 1999 and 2018.

Akintola in Lagos said that the company had begun to achieve its plan of identifying future champions with the rolling out of its plans for the 2019 edition.

“We are happy to organise another edition of the Nestle Milo Basketball Secondary Championships which promises to be exciting and very competitive.

“We remain committed to supporting Nigerian sports at the grassroots toward building champions that will succeed not only in sports, but also in every aspect of life.

“So many youngsters through our platform have become great sportsmen and women; we are very proud of this and remain focused in playing our role in developing the youths through sports,” Akintola said.

He added that the Milo Basketball Championships had remained Nigeria’s only private company sponsored school sports which started with 500 schools in 1999 and has increased tonover 10,000 schools in 2019.

“Over the years, we try to also inculcate the right values such as: discipline, team work, determination, friendship and respect into the secondary school students.

Similarly, Lanre Balogun, the Executive Secretary, NCSF, told NAN that great milestone had been achieved over the years and that there was no gainsaying about Nestle Nigeria’s role in youth development.

According to Balogun, the NCSF over the years has remained an active partner collaborating with all stakeholders in ensuring the smooth running of the competition.

“We play an active role in scrutinizing the players in terms of their schools and the right ages using biometrics to ward off offenders.

“We are proud of the results and remain committed to contributing our own quota to the success of the grassroots programme,” Balogun said.

He said that the company’s initiative over the years had provided the platform for many youths to express themselves through sports and be discovered.

He said that the company had remained the nation’s number one grassroots facilitator, urging more companies to emulate Nestle.

“We are proud that Nestle remained committed over the years in funding sports programme to discover and nurture youths.

“We have continued in our own capacity to support them and when we look back at our achievements, it makes us very proud,” Mohammed said.

Similarly, Babs Ogunade, the Vice President, Nigeria Basketball Federation (NBBF), said that Nestle Nigeria Plc was undoubtedly taking basketball to the next level from the grassroots.

He said that the exploits had gone ahead to represent Nigeria at the FIBA Africa Championships and World Championships.

“We have so many players who are in the national men’s League, in overseas’ colleges and in the professional leagues who began their careers from the championships.

“In future, we are confident that we will be able rely on them to produce future stars for the country and more players that will take over from the ageing ones,” Ogunade said.

The 2017 edition ended with Father O’Connell Science College, Minna in Niger, and St. Jude Girls Secondary School, Amarata in ,Bayelsa, emerging champions from the boys and the girls’ categories.

In the girls’ category, St. Jude Grammar School won the competition in a record of five times more than another school.

Queen of the Rosary Secondary Schools, Gboko, and Nana College, Wari had won it four times separately in the past.

In the boys’ category, Government Secondary School, Minna, Father O’Connel Science School also of Minna, Niger, had won it on two occasions each.