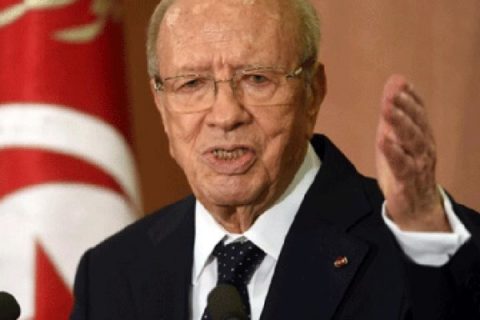 92-year old President Beji Caid Essebsi of Tunisia: says he is not running for second term

Tunisia’s 92-year-old President Beji Caid Essebsi said Saturday he does not plan to stand for re-election in the November polls, in order to make way for someone younger.

“In all honesty, I don’t think I will put myself forward,” Essebsi told the Nidaa Tounes party which he founded in 2012, adding it was time “to open the door to the youth”.

His speech before thousands of members at the party’s congress came several days after Abdelaziz Bouteflika, the 82-year-old ailing leader of neighbouring Algeria, resigned in the face of huge protests ending two decades in power.

Essebsi, Tunisia’s first democratically elected president, urged his party however to overcome the bitter internal divisions and to bring Prime Minister Youssef Chahed back into the fold.

Tensions have flared between Chahed and Essebsi’s son, Hafedh Caid Essebsi, leading to the premier being sidelined from Nidaa Tounes and forming his own rival party, Tahia Tounes.

Essebsi’s secularist Nidaa Tounes won the 2014 elections and formed a coalition with the Islamist-inspired Ennahdha that lasted four years before the two parties split.

Presidential elections are due on November 17, after parliamentary elections which have been scheduled for October 6.

Tunisia, whose 2011 revolt toppled longtime dictator Zine El Abidine Ben Ali and sparked the Arab Spring uprisings, has been hailed as a model of democratisation in the Arab world, but has faced economic woes and jihadist attacks.

None of the North African country’s main political parties have yet announced their candidates for the presidential polls.